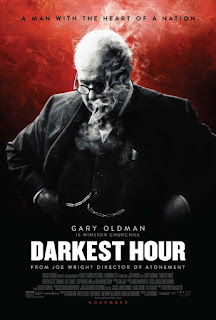 Timing.  If only this picture had preceded Dunkirk, I think we would have a better understanding of both films.  Darkest Hour informs us about Winston Churchill’s darkest hour just after he’s become Prime Minister (without the firm support of key Parliament members and even King George VI) when Hitler’s Germany has occupied the Netherlands, Belgium, and France.  Viscount Halifax (Dillane) and Lord Chamberlain (Pickup) are urging him to start negotiations for peace with Hitler—which is anathema to Churchill.  But to this film’s credit, we feel the tremendous burden the conundrum places on someone with this degree of power.  And Churchill sincerely looks at all sides, finally being convinced of the road to take, delivering one of the most rousing speeches of his career about standing up to Hitler’s military threat.  (The ride on the underground, where he elicits riders’ opinions is the filmmakers’ invention.)
Writer Anthony McCarten and Director Joe Wright have made Darkest Hour a study of Winston Churchill the man—his relationship with his wife Clementine (Thomas) (who continually reinforces the better side of him), his interactions with Parliament members and his staff and the King (Mendelssohn), and frequent periods of doubt and concern over doing what was right for the country and its people.   He seems hardboiled about sacrificing thousands of troops in Callaix, yet when it is made personal by his secretary Miss Layton (James), he is clearly moved and saddened.  When his family toasts him on winning the post of Prime Minister, his own toast is, “Here’s to not buggering it up.”
This may be the role of Gary Oldham’s career, and one that may earn him a long overdue Academy Award.  The makeup and his portrayal of the great man completely hide his own identity.  I tried in vain to see a trace of Oldham the actor in his appearance.  He’s known for a wide range of roles and pictures, Tinker Tailor Soldier Spy, Nil by Mouth (writer, director), Sid and Nancy, The Dark Knight (2), Batman, Planet of the Apes, and Harry Potter, and he well deserves accolades for his performance here.  Kristin Scott Thomas is exemplary in her acting as well, and Lily James is noteworthy in her role as Churchill’s new secretary.
Director Joe Wright is acclaimed for his British productions, particularly Pride and Prejudice and Atonement, but is respected as well for his other films, The Soloist, Hanna, and Anna Karenina. In Darkest Hour, he elects to shine more light on Churchill’s personality, particularly during a tenuous period when he has little support and must convince so many that it’s better not to negotiate with Hitler and Mussolini but for England to stand its ground.  He was a voice crying in the wilderness, because so many in the government were not taking strong stands against fascism, and his good friend President Roosevelt did not feel free (because of America’s neutral stance) to lend air support.
The film highlights that period of time when Winston Churchill proved himself a hero.  Not much will be new to the viewer after so many Churchill movies; the primary reason to see it is perhaps Gary Oldman’s performance.

Behind the scenes government in Britain leading up to the Battle of Dunkirk.


Posted by donnarcopeland at 11:38 AM