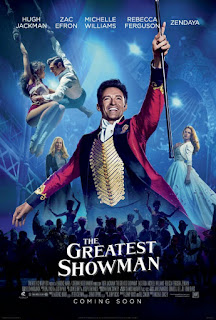 This is about P.T. Barnum’s early years in the beginnings of his productions.  It shows him as a young underprivileged boy needing to scramble even to feed himself, but with such an optimistic outlook, you know that in the glory days of 19th Century America, he is likely to succeed.  He’s even able to win the heart of Charity Hallett (Williams), to the horror of her wealthy parents.
As an entrepaneur, Barnum (Jackman) starts with purchasing a wax museum of historical figures, but moves on to real people who are distinguished by their unusual appearance (height, weight, etc.) or identity (gender race), then adds live performances, and eventually renames his production a circus.  Barnum is an open-minded, accepting person and is shocked when the circus elicits strong criticism and outright demonstrations from the public, some objecting on the basis of exploitation of the performers, and some because of frank prejudice against them.
But with the help of his production manager Phillip Carlyle (Efron), Barnum perseveres, and even engages the legendary Jenny Lind (Rebecca Ferguson), known for having “the voice of a nightingale” for a contracted number of appearances.  The production becomes a huge success, and by this time, he lives with his wife and two daughters in a mansion.  Trouble begins to appear when he makes plans to go on tour, but he doesn’t anticipate the furor in mainstream America against what they would call “freaks”, the downturn in the economy, and disagreements with Lind.  Soon, Barnum is in the deepest trouble he has ever been in.
This is a musical with lyric tunes and choreographed dancing.  The stars Jackman, Williams, Efron and Ferguson have beautiful voices, and the music is lyrical with catchy tunes by John Debney, Benj Pasek, Justin Paul, and Joseph Trapanese, two of whom (Pasek and Paul) composed the lyrics for La La Land.  Hugh Jackman and Michelle Williams are accomplished actors who manage their roles very well, as do Zac Efron and Rebecca Ferguson.
The production has been criticized for giving a rather white-washed view of Barnum.  I gather from a cursory reading on the internet that he was a very complex person with both an admirable and questionable history.  He was a talented, convincing salesman—as depicted in the film—but sometimes went beyond strict truthfulness.  Business and making money seemed of paramount importance, and he was successful in this; but he was also an author, publisher, and philanthropist, giving large donations to Tufts University, property for a city park, and while mayor of Bridgeport, CT, he helped to improve the water supply and install gas lights in the streets.  In defense of his heavy-handed marketing, he said, “I don’t believe in duping the public, but I believe in first attracting then pleasing them.”  Although he did use black-faced minstrels in his shows—not uncommon for the time—while he was in the Connecticut legislature, he defended the 13th Amendment to the Constitution and advocated politically against slavery.
I think critics should keep in mind that The Greatest Showman is not intended to be a comprehensive look at P. T. Barnum’s life, but to offer an uplifting musical that highlights his positive attitude and showmanship, and his exemplification of the American spirit and ingenuity.

A musical account of the birth of showmanship in the form of P. T. Barnum.

Posted by donnarcopeland at 9:17 AM