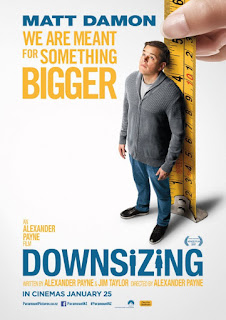 Alexander Payne has come up with a way to save the planet:  Downsizing.  Yes, we could all do with a lot fewer material possessions, but he and his co-writer Jim Taylor realized that if WE weren’t so big, if our bodies were a fraction of their current size, we would consume so much less, and our world would be in much better shape.  Well, this movie clues us in as to how that would work.
Paul Safranek (Damon) is an occupational therapist who was attentive to his mother before she died, and is now happily married to Audrey (Wiig).  They’re struggling a bit financially, in the sense that they’d like a larger, more modern house than the one he grew up in.  Then comes the news about the possibility of downsizing (which would bring one’s standard of living up substantially as one is reduced to about five inches tall), and when some friends who have done it brag about their lives now, Paul and Audrey decide to take the plunge, get downsized and live in “Leisure Land.”  This has all been worked out such that financial resources go so much farther for smaller bodies, enabling the downsized to live like the wealthy—golf, tennis, swimming, big house, etc.
As we go through this transformation with Paul and Audrey, Payne lets us in on some of the pitfalls that ensue following unpredictable events.  It’s best to know as little as possible about the story beforehand, so that the viewer can get a taste of the experience.  I will focus my review on what happens to Paul.
Paul is transformed in ways he could not have imagined.  He becomes more open to the world, to people, and to himself even.  It takes a good while for him to realize who he is and what makes him happy.  He is able to let go of some of his uptight ways and join his neighbor’s (Waltz) party rather than complaining about the noise.  He gets into charitable work through his acquaintance with Ngoc Lan (Chau), whom he initially tries to help with his knowledge of occupational therapy.  She opens up a whole new world for him.  Then when his noisy neighbor, who has really taken to him, invites him to Norway, where the idea and method of downsizing began, it all seems too good to be true.
Downsizing, like Payne’s previous successes (Sideways, The Descendants, Nebraska), brings laughter as well as provoking contemplation.  The combination makes a wonderful mix of humans at their best and their most hilarious, but also their most sympathetic.  The character of Ngoc Lan is the embodiment of all in her keen intelligence, her “bossiness” that everyone is respectful of, and her huge heart that yearns for goodness and truth.  But Payne likewise sensitively shows us the underside of the idealist’s—or perhaps more accurately entrepreneur’s—dream, which is a slum, where some of the downsized enjoy none of the accoutrements others are enjoying.  Another character brings up the fact that the downsized don’t support the economy to the same extent as regular citizens.
Matt Damon shows his ability to portray still another character he is so adept in capturing (such as the characters he played in The Martian, Suburbicon, and The Informant).  Here, he is someone who is rather naïve, but smart enough to figure things out and, in the end, knowing the path to take.  Hong Chau is a star in this production, aptly showing the complexities of a character who is an activist, a famous person, a lowly housekeeper, a caretaker of others, yet canny and aware of her own needs.

This fantasy/social satire is entertaining and thought-provoking.