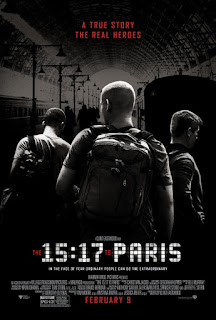 It’s a long time before you get on the train to Paris, although there are a few introductory scenes about the terror on the train.  But first, you must endure the heroes’ background story:   acting-out kids in school with lousy teachers and principal and witness how poorly equipped a school can be in guiding children with learning disabilities or other minor problems that could have easily been remedied with behavioral methods.  If a student stares out the window and has difficulty focusing, a teacher’s answer immediately is medication without having the child evaluated by a professional with that specialty.
The three friends are eventually split up (Anthony going to another school and Alek being sent to Oregon to live with his father), but maintain a close friendship.  Despite his history of a reading disability and difficulty following instructions, Spencer Stone manages to qualify for military service (airman first class in the U.S. Air Force) and realize his dream of being in the military.  The other two forge different careers, but they remain fast friends, and reunite in young adulthood to take a brief sojourn through Europe.  After partying their way through Rome and Venice, they decide to take the train to Paris.  But the thrust of this story is that while onboard, the three heroically foil a terrorist attack with their quick thinking and physical preparedness.
Although Director Clint Eastwood’s aim of putting these men’s story on screen (and having them act out their roles as adults) is an interesting one, the execution of the project falls short for a number of reasons, primarily because the men are not actors, and it shows.  Secondly, screenwriter Dorothy Blyskal’s dialog is wooden with hackneyed phrases abounding.  Third, Blu Murray’s editing uses the current fad of jerking the viewer back and forth between past and present.  It seems like most of Eastwood’s cast and crew are relatively inexperienced, and needed more guidance on his part.  Perhaps he is reflective of and buying into the recent trend of skepticism toward and discounting of professional experience and expertise, even though he clearly doesn’t fit into that category (e.g., his accolades for American Sniper, Letters from Iwo Jima, Million Dollar Baby, Mystic River, and Unforgiven).  Not only the actors, but the writer, editor, and other staff working on the film trend toward the inexperienced.
Sadler, Skarlatos, and Stone wrote a memoir about the experience (with Jeffrey E. Stern) on which the film is based; but I have an idea the part about their early years in school is penned and configured by the filmmakers, perhaps from the trio’s personal accounts or from their own perceptions of school.  This part of the film is the most tedious; toward the end, when the drama occurs on the train, the movie picks up considerably.

Although the idea behind 15:17 to Paris is intriguing, the execution falls far short of its promise.