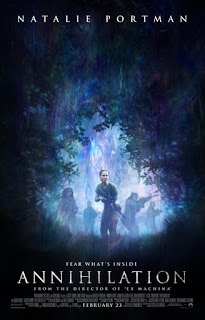 Think about mixing the surreal and mysterious with real human drama within a glorious visual spectacle, and you can envision Annihilation.  Alex Garland has drawn on his previous experience with Ex Machina and plunged ahead with another futuristic presentation of humans confronting what may or may not be an alarming future.  He has the ability to balance the fantastic with the real so that one can buy into his dramas.  They seem otherworldly, yet something we can imagine really happening.  Part of the success of his work is in giving clues from the beginning that will inform the viewer later in trying to explain what transpires later.
We’re first confronted with a puzzling interrogation of biologist Lena (Portman) by a military person in a hazmat suit (Benedict Wong).  He’s asking her who-what-when kinds of questions, the answer to which she says, “I don’t know” or “I can’t remember.”  She appears to be a little dense, but this is one of the nicely misleading cues that Garland does so well.  He does let us know she is a respected biologist at John Hopkins University.
We soon see Lena’s missing husband Kane (Isaac) who appears suddenly after such a long absence she thinks he has died.  Although we learn that he has been involved in a covert operation, he doesn’t have many answers and seems very different from his old self.  But then abruptly he shows signs of a medical condition, which involves calling emergency services.
More drama ensues, after which we see Lena volunteering to explore a new phenomenon that has occurred on earth called “the shimmer.”  Her team is led by psychologist Dr. Ventress (Leigh), and includes three other female scientists.  They will follow in the steps of other military people who have explored the region, but never came back, except for one.  This is a group of very brave women (nice to see!) who have no ties at home (“We’re all damaged goods here”), and for various reasons want to find a scientific explanation for The Shimmer, which “swallowed up” the military’s Southern Reach.
This is where the real adventure begins, with the expected strains on loyalty and mental balance, in confronting threats never before imagined.  It was especially gratifying to see a female character (Lena) having such deep curiosity, determination, and clear-headedness that she is able to confront whatever is before her, without becoming unhinged or allowing images from the past to distract her.
Finally, the electrically charged ending leaves the viewer with possibilities rather than a neat package.

This is a film not to miss for its thrills, human drama, and eloquently presented futuristic possibilities.