BILAL: A NEW BREED OF HERO 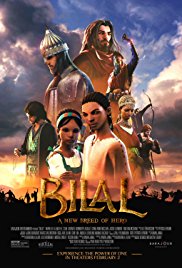 Bilal is promoted as “a new breed of hero”, but this seems to be little different from a host of other such stories, in that Bilal undergoes tragedies from the time he is a child, endures them reasonably well, maintains his rebellious determination for freedom, recognizes words of wisdom and generosity in a strong Mohammed-like figure who buys him from his evil master, and manages with his comrades—particularly his guide Hamza (Mitchell)—to achieve civic and religious goals. The animated story from the UAE is based on ancient Muslim lore during the time that wealthy merchants relegated most of the poor masses to slavery.  Viewers with young children should be aware that the film includes a bloody war.
The thrust of the story lies in its emphasis on freedom, freedom that everyone deserves regardless of appearance or ethnic origin.  This comes through, albeit sometimes a bit preachy.  The story maintains the belief that there is a god who oversees the lives of men and expects them to adhere to his teachings about kindness and social justice, as contrasted with anger and vengeance toward others.  The film is marketed for middle age children and above, but I wonder how many will get their message.  In the screening, there were cheers when the bad guy was undone—evidence to me that they missed the import of the film:  Use a stick rather than a sword whenever possible.
The film is from Saudi Arabia, animated by Barajoun Entertainment, and filmed in Dubai.  Influences of a Middle Eastern perspective are clearly apparent, and I understand that the directors (Khurram H. Alari and Ayman Jamal), and particularly Jamal, wished to present a Muslim point of view that is inclusive of all people in its egalitarianism.  The animation struck me as quaint in comparison with what I am accustomed to seeing, although I don’t know exactly why.  I think maybe because the figures were more robotic-appearing than human-like.
McShayne voicing the haughty slave owner Umayya was just right in showing the sense of entitlement of the ruling class, and his well-taught son Safwan (Ryan and Wingert) took what he said to heart, implementing it whenever possible, being particularly focused on Bilal (voiced by Latimore and Akinnuoye-Agbaje).  Voice acting of the cast is very good in general.
There seem to be internal contradictions in the story (and perhaps it is true of most religions) between the messages of tolerance and the hostilities expressed among the characters.  Although Bilal comes to believe that the stick should be used whenever possible over the sword, killing and war (in which he participates) seem to be condoned.

Although marketed as “a new breed of hero”, Bilal closely resembles heroes in many cultures: undergoing trials, maturing under the guidance of a wise guide, and transforming into a beloved leader.


Posted by donnarcopeland at 10:31 AM