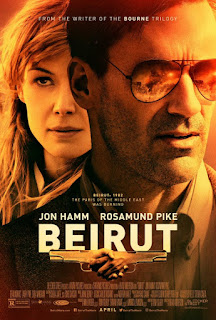 If you go to see Beirut, directed by Brad Anderson and written by Tony Gilroy, you would do well beforehand to acquaint yourself thoroughly with the actor-character pairs, because so many people are thrown at you at once, it’s hard to know who’s who.  This is after the opening scene of an energetic cocktail party gone bad.  No background information is given, either about the story or the characters. So there is a lot of figuring-out to do through most of the first half.  This, along with Mason Skiles’ (Hamm) continuous imbibing of hard liquor brings on a bit of wooziness.
Skiles has gone into a deep funk and become an alcoholic after his diplomatic sojourn in Beirut where he loses all that is dear to him.  He returns to the States after an international reputation for negotiating, only to form a small two-man company that negotiates between small-town bosses and labor unions.  After his partner announces that he is joining another company, Skiles is suddenly presented with a puzzling offer from the CIA, which is to present a lecture at the American University in Beirut on negotiating.  Beirut is the last place he wants to go on earth, but the timeliness (and probably seductiveness of something more exciting than his boring life) of the charge, along with a first-class airplane ticket, cash, and passport, allows him to be “poured” (alcohol reference again) onto the plane.
Once there, Skiles has a devil of a time trying to find out what he is expected to do, because he knows it is more than simply a lecture.  Sandy Crowley (Pike) is clearly tasked with squiring him around, but the agendas of three State Department officials is obscure—until it finally seeps out.  He is to negotiate the release of an American (a former friend when he was in Lebanon) who has been kidnapped by Palestinians.  The exchange is to be for one of the men involved in the 1972 Munich massacre.  This means he has to deal with Israel as well, as they are likely to have one of the perpetrators.
There are additional complexities in the mix that make this film engaging; unfortunately, the viewer is presented with so many puzzles to figure out it simply becomes frustrating.  The filmmakers should have given us more background into characters like Skiles, Crowley, the State Department officials, young Karim (whom Skiles and his wife had sheltered and mentored), and the whole political situation at the time.  When I view a film, I want to be carried along by the story, not charged with figuring out who is who and what is going on throughout.
The actors are the best part of this film, giving color and fascination to an intriguing subject.  I think we were let down by director Anderson and writer Gilroy, who failed to provide the essential elements to make this a captivating story—which it should have been.  It’s only towards the very end when Skiles is negotiating the exchange of prisoners that Beirut comes into its own.

Intrigues during the Lebanese civil war that should captivate us more than this film does.

Posted by donnarcopeland at 4:00 PM