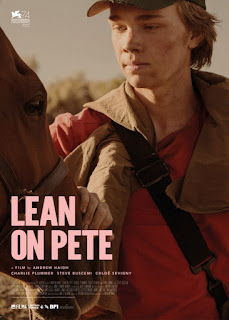 At first in this story, Charley (Plummer) appears to be a hapless teenager whose mother has disappeared and whose father Ray (Fimmel) womanizes (“The best women have all been waitresses at some point.”), makes enemies, and hasn’t much of an idea about how to parent, although it is clear that he loves Charley.  Quietly appealing, Charley clearly has some sense of responsibility as he realizes money is tight in the family and looks for a job.  He happens upon the Portland horserace track and Del (Buscemi), a grumbling horse trainer and quarter horse owner who puts the few horses he has left onto the track, and who takes a chance on Charley.  He hires him for a day to see how well he can do, then takes him on for a little longer when he sees that Charley is different from “most teenagers nowadays” in that he’s an able and willing worker.
Del is a colorful, cantankerous type who forbids people around him to talk very much—especially if they get into personal topics.  Yet, he manages to find out that Charley has not been taught much in the way of manners, doesn’t have a mother, and lives with his father.  That’s about all he wants to know, but it does make him at least slightly sympathetic toward the boy.
Despite the jockey Bonnie’s (Sevigny) warning Charley not to think of the horses as pets, he does get attached to the horse “Lean on Pete”, a not very good racer who might eventually be sold to someone in Mexico for its meat.  Charley does his best to see that doesn’t happen in all the ways he can think of, but it looks like the inevitable is very near.
Charley has had major losses in his life, and when he experiences another one, he decides he can fulfill two purposes in saving Pete and in finding the woman Margie (Elliott) who was a mother-figure to him long before.  The last he heard, she lives in Wyoming, so he has a some distance to go to find her.  He sees no other way out for him and Pete.
Most of the story is about that journey and the tremendous degree of determination and fortitude Charley brings to bear on his situation.  A fine balance is maintained between Charley’s appealing personality (a number of people along his way reach out to help him) and pure and simple bad luck, mean people, and the limitations of anyone this age.
The drama is well told by British Director Andrew Haigh (45 Years) with fully formed characters and keeping up the suspense with only a slight slow-down in the middle.      Plummer does an extraordinarily fine job of giving a realistic view of this unusual teen as he did as wealthy J. Paul Getty’s grandson in All the Money in the World. Critical roles played by Steve Buscemi, Chloe Sevigny, Steve Zahn, and Alison Elliott round out the cast to make this an independent film well worth going out of your way to see.

A boy growing up in life without a niche is determined to find one, one way or another.

Posted by donnarcopeland at 3:58 PM