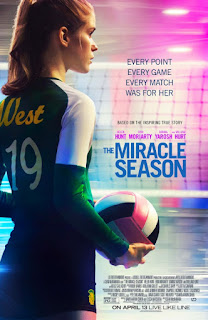 The story begins with the star of the high school girls volleyball team, Captain Caroline ‘Line’ Found (Yarosh), doing her thing, which is to take center stage in any gathering with a special talent for drawing everyone into her circle. She is charismatic and impulsive, and pulls love and adoration from all she meets.  With her hyper vibes and constant chatter, she is a bit irritating to Coach Kathy “Bres” Bresnahan (Hunt), and the coach has to counsel her about what leadership involves.  But somehow, all this works, and the team is pumped about going for their second state title in a row.
But Caroline’s life is not as rosy as it appears; her mother is seriously ill and not expecting to live much longer, much to the sorrow of Caroline and her father, Ernie (Hurt).  She was actually a volleyball star in her day, and has given her daughter the shoes she wore.  The always-optimistic Caroline ignores her mother’s frankness and visualizes that they will be together forever.  Regrettably, this turns out to be an ironic statement, in that Caroline will go before her mother.
Based on a true story, Miracle Season is meant to inspire viewers by getting them into the spirit of the (volleyball) game, and see how a team pulls together in the face of adversity.  The adversity is grief that comes over them after their beloved captain is killed in an accident.  Caroline’s best friend, Kelly (Moriarty) is tapped to take her place as captain, but it’s clear that in their relationship Caroline was the leader, and Kelly’s self-image pales in contrast.
This is the turning point in the story; whereas the first part is almost irritatingly sweet in its idolization of Caroline, the transition into grief and how the characters manage it becomes the meat of the film.  Director Sean McNamara focuses on the different ways people cope with loss, and highlights conversations that are healing and inspiring.  An example is Caroline’s father expressing his bitterness and guilt and then helping Kelly with hers.  He’s a strong force in moving her from hero- worship to valuing herself, and assuming her legitimate role as captain.
Helen Hunt and William Hurt anchor the film as only well seasoned actors can, showing how a viewer can be transported beyond the entertainment value of a film to one of real substance.  Coach is ill at ease socially, but provides the toughness this group of girls (I think the filmmakers tilted them too far into stereotypical “girly” girls) need to overcome adversity.  Hurt is the gentle, fatherly support Kelly, in particular, needs to become her own person.  Erin Moriarty as Kelly, shows great potential for bringing life to a character and becoming a star in her own right.
For its intentions, I think this film succeeds in its likely appeal to viewers wanting to be inspired and follow a sports team with all its thrills and chills. I’m wondering how it will appear to women who actually play volleyball and are on teams.  My impression is that it is overly dramatic in its depiction of the girls, and that for all its heavy focus on the grief, many will, unfortunately, be turned off.  I congratulate the film for being frank about the grief process.

An exciting sports story about an “impossible” comeback, but with dips into the reality of grief.