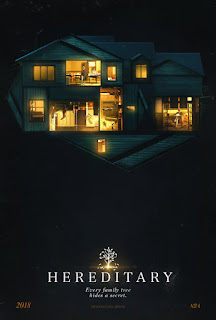 The set-up for Hereditary is truly chilling—not too much to be unbelievable and just enough to make it plausible. The Graham family—father Steve (Byrne), mother Millie (Collette), son Peter (Wolff), and daughter Charlie (Shapiro) appear normal enough.  They live in a picturesque setting in a large old house in what looks to be a small town.  There are hints that strange things are going on in the scattering of dollhouses around the house (that will only become creepier later).  But also noticeable is something in Charlie’s eyes and behavior. For instance, she doesn’t say much, sometimes makes a clicking noise with her tongue, is seen drawing portraits of those around her incessantly, and once, we see her do something destructive to an animal as she casually eats a candy bar.
Millie’s mother has just died, and Millie wonders why she doesn’t feel like crying, but after she sneaks away to a grief-counseling group and her history tumbles out, we can see why.  Sadly, she feels a bit ashamed about attending, and keeps it from her family. Millie is an artist who is trying to meet a deadline for a project that involves figures she must paint so intricately, she needs glasses like jewelers and watch repairmen wear—just another touch to add to the eeriness of the story.
One evening, Peter asks to use the car to go to a party, although he presents it as a school function.  His mother gives him permission, making sure there will be no alcohol, and insisting he take his younger sister Charlie along.  This is one of the first set-ups typical of horror filmmakers—something that doesn’t make sense, but is needed for the plot later on.  That is, why would a mother force a teenager to take a 7 year-old to a social function when neither of them wants it? At any rate, they are compliant children, and they go along.
This is where the movie takes a weird turn.  A tragedy occurs in which Charlie is killed, and the mother is not the same ever since.  This in itself is not unusual (no one is the same after losing a child), but in a horror story like this, the occult is introduced more overtly, where there were only hints before.
Millie’s chance (or not so much coincidental, as shown later) encounter with a member of the support group who hails her down at the shopping center, asks how she is doing, lets Millie know that she too has lost a son and grandchild, and gives Millie her address and phone number “if you need someone to talk to, because we all do.”  Millie makes light of this, once again, significantly, not telling her husband about Joan (Dowd) or the subsequent séance that she will experience in which Joan is able to conjure up her grandchild.
After this, the film goes over the top in typical horror-film paths, introducing ever more fantastic events that have the audience gasping (or laughing, depending on individual perceptions).  Some of these scenes are effective (such as when Millie and Peter start to work on their issues—painful as they are.  But then, the turn is to more conventional horror motifs that have little to do with reality, i.e., Paimon, a king of hell, makes his appearance.
This is a more than admirable first feature by writer-director Ari Aster, and one of which he can be truly proud.  His script and direction, the superb acting—particularly that of Collette—and the cinematography, music, and the rest of the crew make this a noteworthy film.  The music (Colin Stetson) and camera (Pawel Pogorzelski) are visible enough to be characters in being so present in telling the story even when no actors are present.

Horror films come and go, but you should take notice of this one.