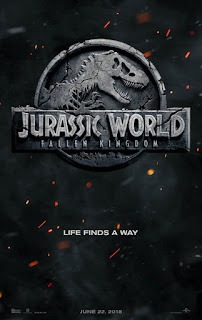 There is a lot going on in this movie, so pay attention. It’s a bit of a hodgepodge involving the threat of a volcano destroying the dinosaurs left on Isla Nublar (from the last Jurassic World); the reunification of Owen (Pratt) and Claire (Howard) and a bit of romantic tension; family issues among Benjamin Lockwood (Cromwell), his granddaughter Maisie (Sermon); her guardian Eli (Spall), and her nurse Iris (Chaplain); the trafficking of animals for use in genetic research and warfare; and, finally, the question of how important it is to save endangered species.
Got all that?  OK, then hop on board for the set-up.   After the park closed in the last film, and the dinosaurs were left on their own, concern arises when a previously extinct volcano begins to erupt, threatening to destroy the dinosaurs’ world.  Lockwood is at the end of his life and wants to do something meaningful, so he has devised a sanctuary on his estate that is big enough for the animals.  He enlists the help of Claire and Owen in transporting the animals off the island to his sanctuary.
There is just one problem—a big problem.  His overseer Eli has let his “business opportunity” self and obsessiveness about wealth get hold of him, and has developed other plans—namely, breeding dinosaurs for specific purposes and selling them as exotic animals in the international market.
All of this engages the audience emotionally (and audibly during the screening I attended), as they experience fears of animals and humans, outrage, compassion, excitement, and all the sentiments evoked in emergency situations.  It’s quite a contrast between these events and the dry exhortations of the congressman Ian Malcolm (Goldblum) urging Americans to accept things as they occur without trying to intervene.
J. A. Bayona (The Impossible, A Monster Calls) has realized on film the Michael Crichton novel in a manner that is engaging, tense, and to some extent thought provoking.  After throwing out so many pointed issues, however, the ultimate resolution is left open, from the fate of the dinosaurs, to the future of the main characters, to the fate of the world as we know it.  Perhaps this is a good thing, in that it reflects succinctly our own times of upheaval.  But the last 20 minutes/half hour is a little bit too much overkill (pun intended); it should have been condensed.

Jurassic World:  Fallen Kingdom will immediately draw you in and keep you on the edge of your seat

Posted by donnarcopeland at 12:48 AM