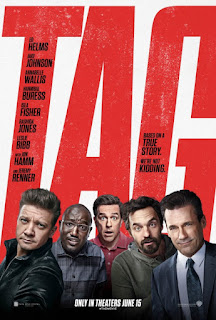 Five guys are ultra serious about their game, having played it since 1983 when they were kids, convinced that it will keep them young.  And they do seem like little boys playing their macho games. After they grew up, they did restrict it to the month of May, but during that month any one of them—or group of them—could appear at any time to tag someone.  The one who is “it” gets to tag, and then that one becomes’ “it”, just like in the childhood game.
This particular May is special (and the reason why changes across time), but Hoagie (Helms) rounds up three of them (having no compunction about interrupting a Wall Street Journal interview or even a therapy session), saying that Jerry (Renner) is getting married and dropping out after this year.  Callahan (Hamm), Randy (Johnson), and Sable need little convincing to hop in the car and head to Jerry’s hometown.  The stakes are soooo high because Jerry is the champion who has never been tagged.
Jerry is the best part of the story, in that he is ingenious in anticipating every move of the conspirators, preparing for them in comedic ways, and—by the way—being a master in what looks like martial arts; he can foil every attack and then escape without being detected.  Renner actually broke a couple of bones in doing his stunts.  He is impressive to watch, and although this is not nearly the caliber of Hurt Locker—for which he is perhaps best known—the role is similar in the character’s canniness and attraction to risk.  It’s certainly different in the mischievous eye of Jerry.
Other main characters are in roles familiar to us.  Ed Helms is the ambitious achiever who often misses the mark by just a little bit.  Jon Hamm is the suave CEO of a large, successful company.  Jake Johnson is the slightly manic talker with a talent for saying the wrong things.  Unlike these, Hannibal Buress’ character isn’t like his previous roles; here, he is thoughtful, speaks in convoluted sentences, and is more than a little paranoid—a clever addition to the cast of characters.
Females seemed to have been “tacked on” in stereotypical roles:  the aggressive Anna (Fisher) dying to be a part of the guys’ game and being a female version of a guy.  Susan (Bibb) being the beautiful ultra feminine bride wielding her power behind the scenes.  Rebecca (Wallis), the reporter so intrigued by her subject’s life, she abandons her intended story to follow him on a tangent.  The most realistic character is Cheryl (Jones), who expertly fields two suitors from high school, maintaining her equilibrium and sense of self throughout.
Tag reflects the backgrounds of the director (Jeff Tomsic) and writers (Rob McKittrick and Mark Steilan) being in television, although they based the story on Russell Adams’ account of the original group of men in the Wall Street Journal.  It plays like an extended sitcom with a bigger budget.  The audience I was with in the screening laughed heartily in the expected places, but I doubt this film will appeal to those interested in wanting comedy to push forward in a wave of creative expression that speaks to the contemporary frame of mind.

A light comedy about a group of men extending their childhood game into macho competitions in adulthood.

Posted by donnarcopeland at 10:55 AM