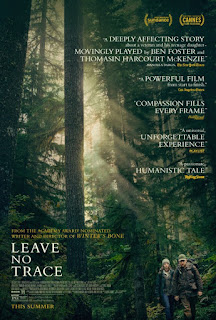 Indie movies at their best weave an engaging story that pulls you right along the whole way, making you question and wonder and fills your heart with nostalgia and inspiration.  That’s what Leave No Trace does.  It’s a quiet film, following a father and daughter as they live contentedly in Forest Park, a nature preserve in Portland, Oregon. They live a simple life, with him home-schooling her, foraging for their food, and sleeping under the stars or under a makeshift lean-to in bad weather.  The father has schooled the daughter in leaving no tracks so they can remain undetectable in a secluded park in the Oregon countryside.
Of course, this idyll cannot last, and before long they are detected (gracefully, by kind-hearted officials), and a kind-hearted benefactor who seems to understand their kind of thirst for independence, gives them a house, employs the father, and the girl is enrolled in school.  This is after they have both undergone numerous evaluations that indicate that they are both smart and she has been well schooled.
However no one seems to take into account that the father Will (Foster) is experiencing PTSD stemming from military service, and this is the way he has adamantly chosen to deal with it.  He is a model parent to his daughter Tom—as in Thomasin—(McKenzie), and they fare very well when left alone.  But society encroaches; it is no longer possible to be truly alone in our world with a degree of connectedness that has never been seen before.
Even as an Indie film, Leave No Trace is unusual in its portrayal of so many people being so open and kind to the unusual strangers Will and Tom, providing them with shelter, work, education, and friendship. They are polite and appreciative, but their benefactors are especially kind and giving.  Such a thing is actually very nice to see in our divided world where most strangers are regarded with suspicion, warranted or not.
The filmmaker Debra Granik (Winter’s Bone) clearly has her finger on the pulse of American life, and her portrayal of the Will and Tom duo (based on the novel by Peter Rock) should be praised for its attention to PTSD and how those affected cope in different ways. Clearly, some need to pursue their own lonely path and should be free to do so.  I especially liked the way the film ends—not with everything resolved—but with a realistic picture of how these things can be worked out.  It leaves you with the tender thought that two people so well connected are not likely ever to be separated permanently.
Obviously, I took to this film and respect the messages it conveys.  But I couldn’t keep from noticing that everyone in it is white and fits the norm for our country.  We all know the trajectory of the story would be significantly different had the main characters been another color, ethnicity, sexual orientation, etc.  But perhaps that is for another movie.  We can appreciate here the soulful representation of very real characters in life.
Ben Foster has achieved a reputation particularly for extraordinary performances in 3:10 to Yuma and Hell or High Water, but here he’s in a very different role—a taciturn but thoughtful wounded man—which he manages just as well.  Thomasin McKenzie is known primarily for her television roles, but she establishes her talent for film features here in her character’s perceptiveness shown on her face and in her body as she struggles with the tension between her father’s outlook and her own observations of society.  Like most teenagers, she sees something she likes and has few qualms about going after it.  The uniqueness of this film lies in her emotionally rational and healthy reasons for going on her own path (as opposed to avoiding conflict) and her father’s willingness to allow her this without anger and without putting much pressure on her.

Differing perceptions about living on the edge, unseen.

Posted by donnarcopeland at 11:01 AM