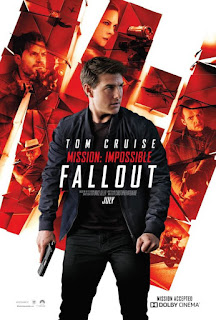 Apparent impossibilities is a running theme in Mission Impossible movies, and this one just about maxes out on them: Careening car chases on busy city streets, a glass and wall smashing brawl in a brilliantly lit men’s room leaving blood everywhere, reverberating near-miss gun shots (although many make their mark, of course), shifting identities (friends turn out to be foes and vice versa—who’s to trust?), multiple players with agendas of their own, complex nuclear bomb dismantlement, and literal cliff hangers make this an exciting, nail-biter of a story.
Ethan Hunt (Cruise) is given the assignment of sabotaging a plutonium deal that is likely to end up as a nuclear weapon in the wrong hands.  He smarts at CIA head Erica Sloan’s (Bassett) last-minute instruction that one of her agents, Walker (Cavill), accompany him on the mission. Hunt gets a sample of Walker’s rashness and ineptness early on in the mission, and it takes all his patience to stomach him, especially when he seems not to have any inkling that Hunt has rescued him early on in a dive out of an airplane at high altitude.
Never mind.  They get right to the business of identifying the parties involved in the plutonium trade, which is more complicated than they imagined.  They will encounter men with ideals to change the world order [Dr. Nils Debruuk (Kristopher Joner) and Solomon Lane (Harrison)]; British Ilsa Faust (Ferguson), perhaps of MI6 and well known to Hunt, who is mystified when she appears on the scene; and periodic reappearances of Sloan and Hunley (Baldwin).  In the process, accusations and proofs of loyalty abound.
Cruise is up to the role as always in his rendition of the Hunt persona and in his continuing bravery in doing as many of his own stunts as possible.  (He suffered an ankle injury during the filming.)  But the number of times he is hanging onto a ledge gets to be almost humorous.  It’s hard to see Henry Cavill (of Superman fame) play the role of thoughtless agent and possibly something worse, a bit of miscasting, since he is not always able to achieve the sinister threat of such a character.  Rhames and Pegg not only contribute fine supporting performances as Hunt’s loyal team; they finely and convincingly execute welcome comedic lines when the going gets tense.  Other supporting actors (Ferguson, Harris, Bassett, Kirby, Baldwin, and Monaghan) perform admirably in their roles, although scenes between Hunt and Monaghan’s character are unnecessary and way too saccharine.
There are so many chases and characters to follow in this breakneck-paced action movie, the viewer can easily lose track, but the main thrusts come through, and you can count on getting the main points by the end.  Sprinkled in here and there are clever little motifs that bring chuckles (for example:  In tense moments a character will ask, “How…?”  The reply:  “I’ll figure it out.”)  At any rate, director Christopher McQuarrie (Mission Impossible:  Rogue Nation) seems to have maintained the series’ good reputation, and perhaps may even have improved on it.

Be prepared for hair-raising ride—literal and metaphorical--in this action thriller.

Posted by donnarcopeland at 3:27 PM