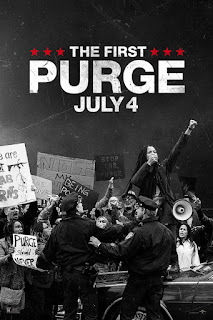 How a whole franchise could be built on a false premise is more than a mystery to me; it’s exasperating.  The premise is that stored up anger can be released during sanctioned violence—and it will be effective within a 12-hour time period.  Oh, sure!
Apparently, a psychologist, Dr. Updale (Tomei), has dreamed up this “experiment” (which, incidentally, would not be approved by any review board in the country, a requirement for all research protocols) as a way to demonstrate that such an opportunity would lower the crime rate to less than 1% for the rest of the year.  The filmmakers apparently think this is possible, because, initially, when the purge period starts, most people are celebrating at “purge parties.”
But that would make this boring, so James DeMonaco (writer and producer in this version and director of the previous three) inserts dirty tricks by having the “chief of staff”, Updale’s supervisor, stack the deck.  Arlo Sabian (Darragh) was hoping the experiment would result in people in poor neighborhoods massacring themselves. He is a member of NFFA (New Founding Fathers of America), which is funding the research that, if successful in their minds, will reduce the number of people needing Federal assistance. When that does not happen, he sends in his recruits to increase the violence, which, of course, will give him points in the NFFA.
What are we to make of this film?  On the one hand, it reflects the strong sense of community among people in poor neighborhoods, their solidarity, intelligence, and awareness, and the dual role gangsters have (partly protective, partly exploitive) in their lives.  On the other hand, it plays into fears about “psychology”, “research”, and government that can unjustifiably undermine trust in those areas.  That is the main problem I have with this film.
The First Purge gets higher marks from me in its social commentary on the solidarity of minority communities, the manipulations of some in power who can swing the tide against them for selfish reasons, and the exquisite bind experienced by drug dealers in their influence for good and ill in their communities (also seen in Moonlight, last year’s Oscar winner).  In First Purge, Staten Island kingpin Dimitri (expertly rendered by Y’lan Noel) is truly a hero, managing to fight off dozens of killers to rescue those closest to him, one of whom is his sweetheart Nya (Davis), who intrigues us with her fierceness in protecting her own.  She has a younger brother Isaiah (deftly played by Wade) briefly seduced into participating in the purge at first.
This film does not differ enough from its predecessors to continue as a franchise.

A false premise acted out enough already for us to have gotten the message.