A STAR IS BORN 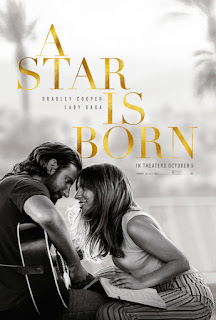 Stars shine so bright on their way up and glow brilliantly for a time, then begin to fade.  Popular rock star Jack expresses this to Ally when she is on her way up to stardom and he realizes his star is waning.  This is a story beautifully told (and sung) about a major rock star stumbling onto an undiscovered talent and recognizing her value, which she does not as yet recognize.  Their lives intertwine in a hot romance that is touching and real, and then they must confront the stresses attendant with established and new fame side by side.
Bradley Cooper, co-writer and director, co-stars as Jack with Lady Gaga as the ingénue Ally.  Gaga shines as a street-wise but innocent budding artist who devalues herself, her voice, her writing, and her looks.  (As per usual, the comments about her looks sting her the most and undermine everything else.)  In her favor is a devoted, admiring father who has given her a solid background.  Cooper is the rock star Jackson Maine, with a huge following and fans everywhere who know him.
The first part of the story charts the musical and sexual attraction between the couple, and its fun to see this and see the chemistry between Cooper and Gaga. This gets you onboard to root for them and care about what happens to them, despite the warning signs along the way; i.e., his dependence on alcohol and drugs, his conflicted relationship with his brother Bobby (Elliott), the meteoric rise of Ally’s stardom, her artful manager, etc.
The signs’ becoming realities in the couple’s relationship tells the rest of the story.
Cooper’s directorial debut is clearly a success, with strength of story, cast, music, cinematography, and all the other components of good films.  His acting and vocal abilities are at their best, and Lady Gaga meets him in her impressive acting debut.  She is a well-established and beloved singer-performer, and to see her ace an acting role is rewarding.  Sam Elliott as Jack’s older brother is sterling as he usually is in a role that fits perfectly.  All three stars are getting early Oscar buzz.
Much should be made as well about Matthew Libatique’s cinematography, so original and artistic in presenting the concert scenes.  His work has a certain mystique about it that pulls the viewer even deeper into the story.  His first-class filmography includes Black Swan, Pi, The Fountain, and Mother.

This movie will play well for general audiences, but it has enough artistic merit in its craft to warrant a higher designation, that of a film worthy of a remake.