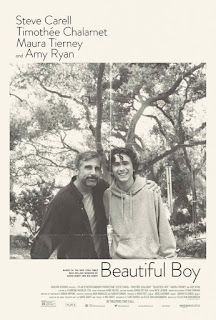 And he apparently was a beautiful boy when he was younger, but as the doctors point out, crystal meth does things to your brain.  One of the things, of course, is addiction.  Nic (Chalamet) is engaging and attractive, and likes to have fun with his younger half-siblings.  He makes good grades, and is optimistic about his educational future.  He has a very close relationship with his father David (Carell), and their family is financially well off.  Nic’s stepmother Karen (Tierney) has doted on him from the beginning. There is no lack of love in this family.  So…what could go wrong?
This film is excellent in showing the ravages of drug addiction across a family, even when everything else is about perfect.  It’s an important point today when addiction is such a major problem, and this film is meant to show that it can happen to any family, even those who are strong in every way.  The stereotype of drug addiction is of a disadvantaged, racial minority; but now, it seems to have invaded diverse groups of people in the U.S.
Beautiful Boy is the story of a gifted boy who, for some unexplainable reason, gets involved in drugs.  In Terry Gross interviews (NPR’s “Fresh Air”) with the actual father and son, whose memoirs form the basis for the film, a physician explained that some people’s brains are more susceptible to addiction and its effects, particularly teenagers, whose brains are still developing. Perhaps that accounts for what happens to Nic.
In short, he is in and out of drug use and rehabilitation, and this goes on for years (from age 17 to 23).  There are desperate calls usually to his father, episodic good times with his family, starts and stops with college, and the gradual wearing down of them all. In addition to their own let-down feelings, David and Karen have to deal with the disappointments of their children when Nic doesn’t show up for special events or leaves abruptly from family gatherings or pilfers cash and sellable items.  Nic’s biological mother Vicki (Ryan) is brought in to help at one point, but it becomes clear that it will take some kind of resolve on Nic’s own part to get his life back on track.
Carell’s performance as an understanding, patient father is commendable for his capturing the angst, love, and bewilderment that a father undergoes in these circumstances.  The supporting figures Maura Tierney and Amy Ryan are likewise strong in their roles.  Chalamet, who has become almost an iconic symbol of a physically attractive, sensitive young man, takes on the depleted, desperate look and demeanor of a drug addict (losing 25 lbs. to prepare) just to the point where you will still be sympathetic toward him. He is an actor with a great future ahead.
Despite its high quality of filmmaking, Beautiful Boy may not make it to awards season.  I attribute that primarily to the subject, which is depressing indeed—not excitingly dark—but simply depressing.  I applaud the filmmakers for capturing the addiction experience so well, it almost looks like a documentary.

A profoundly emotional—and realistic—account of drug addiction and its far-reaching effects.

Posted by donnarcopeland at 3:15 PM