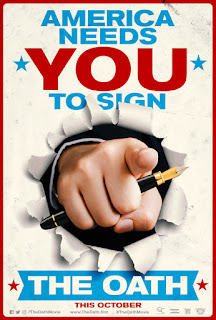 This film is so unrealistic it becomes meaningless.  The premise looks promising for an exploration into our politically divided country trying to deal with the film President’s requirement that every citizen sign an oath of loyalty to him.  It is timely, in that we hear reports of our current President actually asking directly whether members of his staff are/will be loyal to him.  But, unfortunately, writer/director (and star) Ike Barinholtz placed the issue in a family drama that doesn’t even pretend sensitivity or subtlety in its exploration and goes over the top in absurdity.  And although I’m sure this is intended to be its “comedy”, few people were laughing in the screening—only a few chuckles. It’s basically an hour-and-a-half of screaming arguments peppered with foul language, threats, and insults.
It’s Thanksgiving, and Chris (Barinholtz) and Kai (Haddish) have invited his family to their house.  Chris is something of an agitator, vehemently opposed to the oath and compelled to find out exactly who has signed it.  Most are in a politically conservative frame of mind and did sign it, but Chris can’t let it go; he incites arguments repeatedly, showing that despite his “liberal” views, he is judgmental and socially insensitive and disrespectful. He has had long-standing conflicts with his brother, and their old resentments add fuel to the fire.
Just to make matters worse, up the conflict to another level, (and increase the absurdity), “someone” has reported Chris to the CPU, the government organization within Homeland Security that has the authority to bring people in for questioning.  There have been rumors that some people have disappeared after being taken away.  So when two agents, Peter (Cho) and Mason (Magnussen) come to the house and are let in when Chris is out of the room, he goes ballistic.  The ensuing fracas involves not just verbal and physical exchanges, but a gun, a taser, a couple of shovels, and lots of blood.
Although the actors are generally very good, their characters are unsympathetic and often obnoxious. The solutions they, especially Chris, come up with are rather stupid, the most glaring being that despite the serious injuries of one person, 9-1-1 or an ambulance are never called. Surprising to me, the only adults that are sympathetic and sensible at all are Kai and Peter, one of the agents. (A clever casting choice was Haddish, in that in previous roles, particularly in Girls Trip, she is the outrageous one; here, she constantly tries to calm her husband down and give him good advice, which he seldom takes.)  Peter talks and behaves like a good government agent who knows how to instill calmness in a situation and is basically honest.  Other than these two, the other characters mainly elicit groans.
It’s difficult to come up with what Ike Barinholtz had in mind as to the purpose or point of this film.  I hear he wanted people to stay mindful of humane values in the current political climate, but when no character in this film seems to do that, its puzzling. Reflective of his background in comedy, The Oath movie feels like an extended comedy routine that goes on too long.  Only, instead of comedy, we see a dysfunctional family and suffer through it as we would in a real-life situation with such a group.
Finally, of all things about this film that were almost intolerable, the pounding blast of music that marks the countdown from Monday to Black Friday when all oaths should be signed is appallingly bad.  Bret Mazur blasts our ears five times just to tell us a day has passed.

If you would like to see how a dysfunctional family spends Thanksgiving, The Oath may be the film for you. It’s billed as a comedy, but…