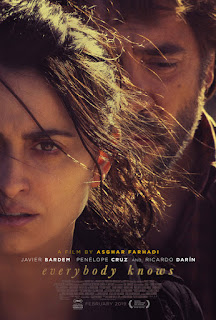 Oh, what a tangled web of secrets in this extended (2¼ hour) mystery.  Lots of characters within a family are thrown at us at once, making it difficult to keep track of who is who, although the main characters, Laura (Cruz) and Paco (Bardem) are obvious from the start. Alejandro (Darin), Laura’s husband, only enters during the last half of the story.
We see Laura and her two children, Irene and Diego, being picked up by Laura’s sister Ana in Spain, a place where Laura grew up.  They have come from Argentina for Ana’s wedding, a huge affair in a small village.  As more and more relatives are introduced, it becomes confusing again as to who everyone is. But they’re all in a festive spirit, and Irene pairs up with a local, attractive Felipe.  She is a daredevil driving his motorbike on country roads with him on the back trying to caution her.  This will be a theme in their brief time together.
The wedding takes place within a sea of fast-moving images, lots of drinking, dancing, and hilarity, and at one point, the lights go out in a thunderstorm. Even before the cake is served, Irene has become woozy and is taken up to bed.  The next morning, she has vanished, with clippings from a newspaper left on the bed, telling the story of a kidnapping years earlier.
Before long, Laura is getting messages from the perpetrators demanding a huge amount of ransom money.  Of course, Laura is beside herself, and since her husband stayed home in Argentina, she turns to Paco, an old childhood friend, who now owns a winery.  Curiously, his wife, Bea, begins receiving the same messages as Laura.
What follows is the unearthing of family secrets and past family resentments as they try to figure out where Irene is and whether she is alive, since they’ve been forbidden to go to the police.  Complicating the picture, Irene has asthma and is presumably without her medication.
The Iranian filmmaker, Asghar Farhadi, is known for his detailed dramas in which he explores human traits in complex dilemmas.  These often have ethical/moral binds the characters have to work through.  Everybody Knows seems not quite up to his previous work in About Elly, A Separation, The Salesman, and The Past, but he is remarkable in producing a Spanish language film with well-known Spanish actors—without knowing the language at the outset.  The film opened the 2018 Cannes Film Festival and was nominated for the Palme d’Or.  It resembles About Elly in its theme of kidnapping, but the gossip and secrets are within a family rather than among friends, and there are other differences.  In this film, one is left with additional questions and musings that are not addressed in the end.
Cruz and Bardem are revered actors who give exemplary performances, and this is no exception.  Ricardo Darin is an award-winning actor from Argentina whose acting here is entirely convincing and appealing.

Asghar Farhadi continues to intrigue/puzzle us with his human dramas.