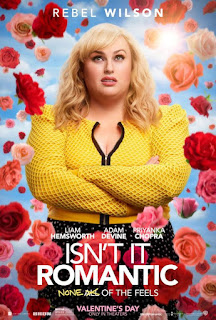 How long has it been since you saw a creative, really romantic rom-com with new ideas?  I daresay not since the 1990’s and maybe early 2000 (e.g., When Harry Met Sally, You’ve Got Mail, Sleepless in Seattle, High Fidelity).   Isn’t It Romantic is predictable based on all these earlier films and it, unfortunately, borrows from Melissa McCarthy’s playbook in having the heroine blunder, stumble, and tumble time and again.  But hey!, these antics are always good for a laugh in the audience somewhere.
The set-up here is that Natalie—apparently a very good architect—is filled with cynicism about love and romance, belittling her assistant for watching rom-coms—not because it’s at work, but because she is disdainful of such stories—and being oblivious of every admiring glance, compliment, or invitation that comes her way.  The basic concept is introduced realistically by having Natalie’s mother delivering rather constant skepticism about anything touching on the romantic, especially where Natalie is concerned because she is heavy-set.  (“Give up those dreams, girl; that will never happen to you!”) The story also brings home the resulting lack of self-worth that Natalie has developed, as in “Sure, I’ll take your trash and dispose of it”, “Sure, I’ll call the printer repairman”, etc.
What transpires in an expected way is that Natalie has experiences that finally bring home to her—that is, she gets—what she has been missing; that despite the feedback from all her friends, not only does she miss the denigrations, she misses the positives coming her way.
The journey it takes to get to insight for Natalie involves encounters with doctors, a suave charmer (Hemsworth) at the office, and her best-friend office mate (Devine).
The film ends up modeling basically good principles that highlight the value of substantive human connections, but it essentially repeats what its predecessors have already portrayed.  So I have to ask about the reason for the film.  Is it meant to titillate viewers with the high life (private planes, yachts, extravagant parties), and then expect to pull them in with heartfelt values?
Rebel Wilson is a gifted actress who, like McCarthy in her movies, is using slapstick to make light of being heavy, which overshadows their acting ability. How I wish both of them would find/pick  scripts that portray them as normal people with interesting problems that ignore their physical appearance.  It seems to me that the Europeans are much better than Americans at casting actresses based on their ability to portray all kinds of characters irrespective of their physical appearance.  This movie runs the risk of promoting a stereotype when it’s trying to do just the opposite.
It’s the acting that will save this film—if anything will—not the hackneyed story.

Rom-com about a heavy-set woman having dreams that are fulfilled—just not in the way she expects.