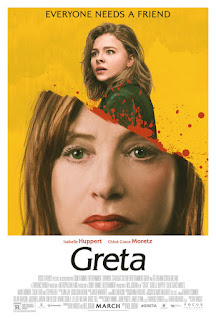 Like many thrillers, Greta has a benign start in someone showing kindness to another.  Francis (Moretz) finds a purse left on the subway, with ID, cash, etc., inside.  Her roommate Erica (Monroe) sees it as an opportunity for a spa day, but Francis is an honest, kindhearted soul who sees it as a duty (and a privilege) to return it personally to its owner.  That is Greta Hideg (Huppert), a charming widow who is very grateful and offers Francis tea and company.  They chat, and Francis learns that Greta has not only lost her husband and her dog, but her daughter is in France.  Out of genuine empathy, Francis offers to help Greta find another dog.  This is politely refused; however, soon after they part, Greta calls on the phone and takes Francis up on her offer.
Francis does indeed help Greta, and as they spend some time together, they become friends.  This is somewhat to the chagrin of Francis’ roommate, Erica, who finds that Francis’ time with Greta means less time with Erica.  “Why do you want to spend so much time with an old lady?” she asks, and suggests that Greta stands in for Francis’ mother who passed away the year before. Francis is dismissive of this charge; however, when she is at Greta’s soon after, she finds something disturbing, and decides to end her friendship with Greta.
Ah, things are never so simple in a thriller.  As she tries to extricate herself, Francis confronts a needy, controlling stalker who is determined to hold onto her. Stalking is only the beginning of the horrors that are in store for Francis.
This is the place where I had problems with the movie; at this point, it piles on so much, more and more, it loses its appeal, and becomes a laborious slog to get to the end.  Before it does wrap up, there are entertaining scenes with Erica back in the picture to enliven it.
This film pales against Huppert’s previous film, The Piano Teacher, partly because it does not delve into the perpetrator’s psychological past.  We see that Greta is lonely and that she has a checkered past, but we’re not shown the antecedents to her obsessions.
Isabelle Huppert is her inimitable witchy threat who sends chills up your spine with her craftiness and manipulative ways.  Moretz has her character match Greta’s terror with her innocence, naïveté, and compassionate willingness to help others.  This juxtaposition is one of the strongest assets of the film.  Stephen Rea’s cameo offers additional thrills, and Maika Monroe’s savvy solution to the problem is clever.  One of the biggest faults of the story, however, is her character’s suggestion to Francis to apologize to Greta and take responsibility for a “misunderstanding.”  This is a weak plot turn that seems stupid on its face, in view of the severely disturbed character they are dealing with.

Despite minor weaknesses, this is a tight thriller that will entertain you.