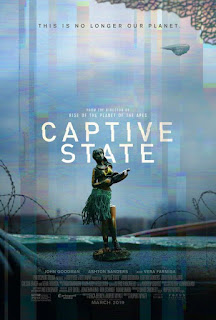 Writer/director Rupert Wyatt and his co-writer Erica Beeney have boasting rights for a movie that leaves the audience mystified until the very end.  In the meantime, viewers sit and wonder what the h--- is going on and try to figure out who the characters are. This takes place on a darkened screen where much of the action is hidden, just like the characters. By the time it starts to become clear—as one viewer observed—you’ve become disengaged and have little investment in the outcome.  There’s a major twist after the fog, but it’s too little too late to be exciting or satisfying.
The beginning scenes and text inform the viewer that Chicago has been taken over by aliens and that everyone has an identity chip and is followed constantly by cameras with monitors behind them.
We see more of John Goodman in the Chicago police station as a district commander than anyone else.  He clearly has an investment in Gabriel (Sanders), the son of his deceased partner, but this kid doesn’t want to have anything to do with him.  Gabriel and his older brother Rafe (Majors) have had a hard time after their father’s death, but clearly don’t see the commander as any kind of mentor.  The commander has been studying and following events closely for nine years since the invasion, and he is convinced that something major is about to happen. No one seems to take him seriously, including his supervisor, who sees him as a little crazy.
Another thing we see is a group of characters who have united together with plans to escape (to where, we’re not told). Much of the story involves their various ruses to become anonymous and get out of Dodge...Chicago.  They’re seen as insurrectionists by the police, who have been cooperating with the aliens in a compromised position.
This leads up to the twist, which I will not reveal.
I generally admire John Goodman’s performances, which are almost invariably excellent; but in Captive State, the script shows him to be something of a gumshoe, uninteresting and run-of-the-mill. He sometimes seems to have a conscience, sometimes not; and to genuinely care, sometimes not.  So as the lead actor, it’s not easy to get behind him and cheer him on.  Vera Farmiga is wonderfully mysterious—as she is supposed to be—making enigmatic pronouncements that are worth paying attention to.  Ashton Sanders (Moonlight) is a young actor to pay close attention to; he captures all the nuances shown by a young man being pulled in different directions and learning about the paradoxes of life.  These performances are about the only aspect of the movie to savor; otherwise, there is not much.
Captive State had potential for being a provocative, currently relevant story; however, the execution failed to deliver, mostly by keeping the audience confused and in the dark most of the time.

If you want sci-fi, you won’t get it here.  If you want thriller, it comes too late for you to care.

Posted by donnarcopeland at 1:52 PM