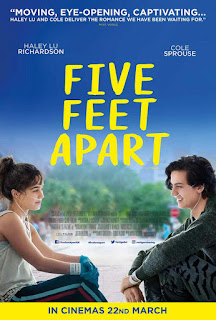 Although not groundbreaking (c.f., Me and Earl and the Dying Girl, The Fault in our Stars, and Miss You Already and many others through the years), Five Feet Apart can be seen as an engaging story that is uplifting despite sad and disappointing turns of events. Director Justin Baldoni clearly knows of what he speaks (presumably from past experience) in a film about teenagers, the restrictions placed upon them by an illness (cystic fibrosis or CF), and how personality, past experience, and connections with others are all in play.
The normalcy in this film about illness involves its two main characters, Stella (Richardson) and Will (Sprouse), who are polar opposites in personality and outlook on life finding common ground as they fall madly in love with one another. Each is good for the other. Stella’s self-described “OCD”, commitment to treatment, and a rosy outlook on life are juxtaposed against Will’s acerbic outlook and casualness toward treatment that frequently pushes boundaries.  They both have cystic fibrosis (and you will learn much about the disease in seeing the movie), which requires frequent hospitalizations, daily treatment regimens, and the proscription of contact with another person with CF; that is, they can have physical contact with family and friends, just not with fellow patients.
The entertainment comes from the push-pull of the two developing real appreciation and caring for the other.  The dialog (writers, Nikki Daughtry and Tobias Iaconis) is both snappy and thoughtful while maintaining a reality base so that it doesn’t sound morbid or like something written for stand-up comedy.  This includes the fussiness of Nurse Barbara (Gregory) as she tries to keep the slightly rebellious teens in tow after getting “burned” once before (“Not again on my watch”, she proclaims), interactions among the CF patients, and messages from the medical staff to families.
Different kinds of guilt become a running theme woven into the main story.  Stella suffers from “not being there” at the right time for her sister.  Barbara feels guilty about loosening restrictions on two previous patients. One CF patient expressed distress about the burden of his illness being placed on his family.  In the course of the story, these troubles are sensitively addressed.  This is another example of how the film moves beyond the “death and dying” issue to deal with everyday concerns.
One drawback of the film is toward the end when the filmmakers tease and pull the rug out from under the viewer.  Just how many last-second saves should be in any script?  But above all, Five Feet Apart demonstrates the importance of physical touch to all of us.  Not only is abstinence a strain when expressing delight, but it’s crushing in moments of grief.  We see how much Stella’s and Will’s minds and eyes have to make up for the absence of even the slightest physical connection.
Haley Lu Richardson (Support the Girls, Columbus, The Edge of Seventeen) clearly lives up to her acting promise in portraying a complex teenager with major challenges behind and ahead of her.  Cole Sprouse, whose claim to fame rests primarily on the TV series, “Riverdale” in which he plays a lead role, shows a range of emotional sensitivities and ease with his character in this production that should prove his dramatic talent.  Essential to the success of this drama is Poe, expertly played by Moises Arias.  He is an important third in the Stella/Will drama in his contrast with Stella and Will and in his tempering/uniting their differences.
Musicians Brian Tyler and Breton Vivian composed a wonderfully provocative score that captures and enhances so well the varying moods of Five Feet Apart.