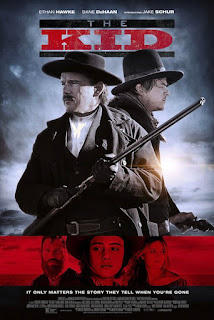 Although pretty much a typical western, The Kid has a few surprising twists and turns.  Rio (Schur) is a 14 year-old boy without a good father figure on which to pattern himself.  But he has read about Billy the Kid (played here by Dane DeHaan) and has a huge case of hero worship.  When he and his older sister Sara (George) are on the run after a tragic encounter with their uncle Grant (Pratt), whom should they meet on the way but Billy the Kid.  Sara, knowing the dangers of information, has cautioned Rio against telling anything about their story, so he doesn’t confide in Billy when they get holed up in an isolated house on the New Mexico prairie, despite Billy’s famous friendly chatter.  Rio does let him know a little of his story, and Billy is immediately touched, identifying with him and giving Rio a memento of their connection.
Sheriff Pat Garrett (Hawke) has gotten a tip about where the bandidos are hiding, and appears on the scene, capturing Billy and his cohorts.  When Rio and Sara suddenly appear, it’s a surprise to the lawmen.  Sara tells the sheriff that they “got separated” from their father, and are on their way to Santa Fe to find their mother’s friend, and the sheriff—a clearly honorable man with a conscience—offers to let them ride with his train to the place where they will drop off one of the prisoners.  Then he will take them to Santa Fe before proceeding to Lincoln County with Billy.
Most of the story takes place on these eventful rides, with Sara’s, Rio’s, and even Sheriff Garrett’s lives threatened here and there.  One of the most threatening is when Uncle Grant finds Rio and Sara and kidnaps her.
Sheriff Garrett senses that Rio is hiding something, and asks him over and over if he has anything to tell him; but Rio always says no and glosses over the real story.
The Kid has all the usual western tropes of gun slinging, posses, a sheriff who attempts to bring justice, etc.; but it also has:  The unlikely friendship between a wanted criminal and a boy who’s trying to figure out morality in life; men talking emotionally about their first kill; and periodic philosophical musings from a sheriff [e.g., “It’s the world we’re in“ (i.e., we’re not in control of everything); "It’s not intelligence; it’s lack of fear”, “It doesn’t matter what’s true; It matters the story they tell when you’re gone.”
Director Vincent D’Onofrio and writer Andrew Lanham have created a story with all the excitement and color of a western, but have inserted little elaborations that make it interesting, such as the thoughtfulness and humanity of the sheriff, reflections by men about their experiences of killing, the thoughts of a boy about life’s dilemmas, and the devastation of sexual exploitation upon a young woman.
Outstanding actors include Ethan Hawke—always superb in his portrayals--Jake Schur as the impressionable but thoughtful Rio, Dane DeHaan as the crafty, teasing Billy the Kid, and Chris Pratt of the Jurassic World, Avengers, Guardians of the Galaxy, and Passengers world, becoming a bad guy in a western.

For westerns fans, The Kid has something to offer beyond the usual fare.

Posted by donnarcopeland at 8:07 PM