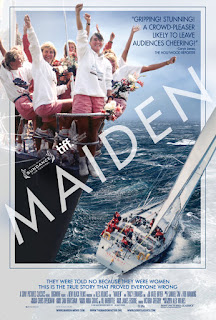 Maiden:  A film beautifully directed by Alex Holmes, that should be seen by boys and girls, men and women, to counteract misconceptions about supposed differences between males and females.  In addition to Holmes’ direction, Katie Byer’s editing brings the viewer along on the race at a well planned pace, so that it becomes a mystery as to how this Whitbread Around the World Ocean Race will turn out.  The journey before and during the race is just as interesting.
By the time Tracy Edwards was a teen, she didn’t show much promise for achieving anything.  Her life started out well with loving parents, but when she was 10 years old, her father died suddenly.  Her mother had been a good influence in pressing the envelope of what was expected for females, but when she tried to take up her husband’s business after he died, she began to run into obstacles and wasn’t able to keep it going.  She then made an unfortunate match after that, wedding a man who turned out to be an abusive alcoholic.
Tracy had run-ins with him, and after being expelled from school departed home for a backpacking trip in Europe.  She ended up in Greece, first becoming a barmaid, then realizing that she wanted to be on a sailing ship, took a job as cook (and cleaner) on the sailboat of a friend who went against the grain by allowing a woman on the boat as part of the crew.  It was during this period Tracy learned to sail, which was all “about freedom”, she said, and as soon as she heard about the Whitbread Ocean Race, she began having aspirations to enter.
Little did she realize beforehand what she would run into, but quickly became aware of the negativity and skepticism she would encounter as a woman, let alone getting a sponsor, a boat, and a crew (an all-female crew, she decided).  As often happens, some luck is involved, and when Tracy, almost by accident, crosses paths with King Hussein of Jordan, he is impressed with her and her efforts to enter a “man’s world”, and they stay in touch.  In the end, after being turned down by hundreds of companies who will not sponsor her, Tracy appeals to the King, and he agrees to help her.
At this point, Tracy has manages to buy a used boat, hire a crew to help her refurbish it, and enter the Whitbread race.  She runs into trouble even before the race begins with a personnel problem, so ends up taking over the First Mate’s duties herself.  This proves to be a test of her own leadership as to whether the crew will remain.
Throughout the 33 thousand mile journey around the world, it’s exciting and sometimes terrifying (Cinematographer Chris Openshaw exposes us to choppy seas, gigantic waves, ice bergs, and more to give us a sense of really being there), touch and go with the sailboat competitors, and the emotional and physical toll the trip will make on the crew—sometimes as a result of trauma on another sailboat.
Documentaries are not generally exciting, but this one is with its moment-by-moment coverage in dangerous situations.  If one is not experienced in sailing, this is a good time to learn what is involved—the physical demands; the engineering knowledge of the boat and how it’s constructed; and the leadership, determination, and true grit of pulling off such a demanding race.
The film does a good job in highlighting Tracy Edwards, both in her early life, which shaped her into the young adult she became, and in her experiences and insights later on that guided her in making her choices.

For the thrill of the race, Maiden comes through with excitement, mystery, and true grit.

Posted by donnarcopeland at 5:24 AM