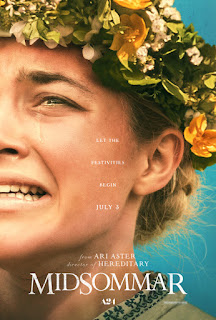 Midsommar brings to mind romantic associations to a festival, summer/winter solstice, and cultural traditions.  How much writer-director Ari Aster (Heredity) depicts actual traditions in this film and how much he embroiders them with his own fantasies, I’m not sure, but suspect that most of what is seen in the film is from Aster’s own imagination. The film certainly goes way, way out in its characterizations and plot, so that by the end you know you’ve seen a freaky, quintessential horror show.  It’s helped along by Pawel Pogorzelski’s eloquent, captivating, and beautifully composed cinematography and The Haxan Cloak’s music that draws from genres ranging from the medieval to the hauntingly eerie to the most dissonant modern.
Midsommar begins as a thoroughly American kind of drama, with a couple, Dani (Pugh) and Christian (Reynor), who are going through ups and downs.  She is very needy, especially after a tragedy in her family, and his friends urge him to ditch her for someone else.  A trip to Sweden might be the answer.  Pelle (Blomgran) has invited his close friends [Christian, Mark (Poulter), and Josh (Jackson-Harper)] to go with him to his native Sweden for the Midsommar festival.  He grew up in a commune, so they would all be welcomed by his huge family. They hadn’t counted on Dani going with them, but she wangles an invitation, and Pelle lets her know how happy he is that she is coming along.
The American group arrives in Sweden, and are taken to country fields sprinkled with people who turn out to be part of Pelle’s large family.  He introduces them all—ever the gallant host—and his friends are awestruck.  They will be even more awestruck when they impulsively decide to trip on drugs supplied by the communal community.  Dani is reluctant to imbide, but under peer pressure gives in; only to re-experience the tragedy she just endured.  But she gets hold of herself, and proceeds with the others to Pelle’s commune, where there are throngs of people all dressed in white.
The rest of the story is about what the friends encounter and experience there, which ranges from the simple (helping cook meals) to the esoteric (engaging—not necessarily willingly—in bizarre rituals).  The viewer likely will experience what most of the American characters experience—a curiosity followed by unease and anxiety, even hysteria, and, finally, horror.
Some may find comfort in preordained events—at least from godly figures (there’s nothing you can do about it, so you can’t be blamed)—but when they’re orchestrated by controllers with an ulterior motive, it can be the most unsettling and horrible experience one can imagine.  That is what Ari Aster does with this film.  He subjects his characters—and maybe viewers as well—to events they’ve never dreamed of, prompting us all to wonder what we would do in those circumstances.
After her stint as Katherine in Lady Macbeth (2016) and here, Florence Pugh establishes herself as an actress with range and talent.  That being said, her role, as written, does not provide much of a showcase moment.  It’s actually true for all the characters; actors are not given opportunities to shine. Aster’s intention appears to be emphasizing story over characterization, specifically in the contrasts between cultures.  He jabs Americans a bit in their general disregard for tradition and in their inclination to break rules (a bit of “ugly Americans”), but the Swedes’ traditions as shown here evoke strong opinions about attitudes about death and individual agency.
The film’s two-hour twenty-minute length may stretch the viewer’s tolerance; certainly, some of the over-the-top last scenes could have been cut, and making a better film.

A cross-cultural trip like one you have probably never seen.