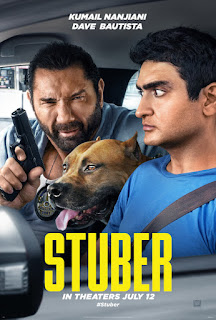 Straightaway you will be able to guess how this story plays out.  What you may not expect—unless you’ve seen the previews—is that the L.A. policeman going out for the big sting cannot see (from Lasik surgery) and that neither he nor the Uber driver can drive (that is, really drive).   Understand that a large part of the action takes place in cars.  The numerous “jokes” in the film are an attempt to make all this funny, but only one in about twenty made me chuckle.  Two were worthy, one being when the policeman is taking a perp to a hospital, he directs the Uber driver to an animal hospital. “He is an animal!” is the justification.  The other is in telling the policeman who gives his daughter a gun for protection when she is pleading for attention, the Uber driver scolds him with, “You give people glocks instead of love.”
The story is that Vic (Bautista) of the LAPD has been tracking a major criminal for years, and just when he has a chance to capture the kingpin, it’s just after he has had eye surgery and on the very night of his daughter’s (Morales) art gallery opening.  The day before, Vic’s daughter has made sure he will get to the opening (he has a reputation for not showing up) by reserving an Uber to pick him up and take him there.  The Uber arrives, driven by Stu (Nanjiani), a loquacious, desperate to please (and earn good ratings), conscientious driver (albeit, not adept at all in making U-turns). Vic is extremely confident in taking on both tasks—capturing Teijo (Uwais) and attending the gallery opening.
Think of all the things that can go wrong in this scenario, and you will probably be right; they do, and it turns out to be more frustrating than entertaining before it descends into something you’ve expected all along.  Stuber actually had the potential to be a really good spoof (for example, Stu the Uber driver); but the execution just doesn’t bring it home. Attempts are made by showing off Bautista’s physical strengths (macho) juxtaposed against Nanjiani’s emotional sensitivity (“effeminate”), which ties in with one of the overall aims being to make Vic become more sensitive and Stu more assertive, which the film achieves, but it follows from a script based on clichés and improbable events.
All of this is supposed to come together in a romantic ending where heroes can be named, loves can be declared, and justice is served.  You can be the judge as to whether this happens.

A clever beginning concept of Stu being the uber driver devolves into absurd hi-jinks and cliché jokes that may not leave you laughing.