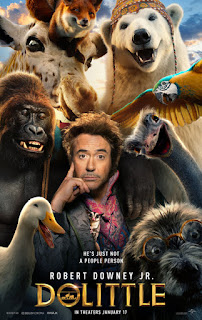 Talking to the animals and having them respond back.  This movie is surprisingly convincing in making you think it is possible. Dr. Dolittle (Downey) has been holed up in his house, not doing much of anything but talking to his animals after he lost his love Lili on her adventure at sea.  He lives with these creatures, and seems to be gradually going nuts.
In the meantime, there is young Tommy Stubbins who can’t bear to shoot animals on his family’s hunting expeditions (much to the puzzlement of his father) and one time, he accidentally wounds a squirrel named Kevin (Robinson).  Desperate, he runs to the animal doctor’s house to get him to save him.  Now, Kevin is outraged and deeply resents Tommy, vowing throughout the story to get his revenge.
On his way to Dr. Dolittle’s, Tommy runs into Lady Rose (Laniado), Queen Victoria’s niece.  The queen is gravely ill, and has specifically asked for Dr. Dolittle’s help.  But the doctor is still grieving for Lili and is insufferably cranky, just wanting to be left alone.  After reluctantly reviving Kevin, he’s talked into (after being told that if the queen dies, his house will go to the Treasury and he’ll have to find another place to live) going to the palace, riding ostrich Plimpton (Nanjiani).  Unbeknownst to Dolittle, Tommy has stowed away in the carriage with Lady Rose, consistently begging the doctor to take him on as his apprentice, but always denied. Nevertheless, Tommy tries to be as useful as he can and learn to talk to the animals on his own.  It will take a long time for the distracted Dr. Dolittle to recognize Tommy’s value.
They arrive at the palace, Dolittle quickly diagnoses the queen’s problem (by most unorthodox but entertaining means), and decides that the antidote can only be found at a remote island.  To reach it, Dolittle must steal Lili’s diary with directions to the island from her father, King Rassouli (Banderas), king of the pirates.  This requires detailed planning, because the king is not pleased with his son-in-law.
Adventures begin on the high seas, with the Dolittle party in one boat, and jealous rival Dr. Blair Müdfly (Sheen) in hot pursuit.  Seems there is some palace intrigue, and Müdfly has received certain instructions to sabotage the Dolittle party.  In addition, the crew will have to either sneak into the palace and retrieve the diary or confront King Rassouli directly. The struggles on the ocean and within the palace provide enough tension and interest to qualify for a kid’s action movie.
In this whole saga, Robert Downey Jr., is in his element, being playful and crafty at the same time (one of his trademarks).  Martin Sheen is a worthy adversary, with greedy eyes and rude hoots when he thinks he has won a battle.  Antonio Banderas plays the more cosmopolitan figure with exotic appearance and inflated entitlement to redress perceived wrongs against him. All the other supporting actors—including those who lend their voices to the animals—are superb.  They’re given wonderful lines that perfectly capture their individual personalities, such as one with self-esteem problems, one with daddy issues, one inclined to bury his head in the sand when the going gets rough, and one suffering psychological aftereffects from stomach problems.  Much to the character’s credit, Dr. Dolittle at times functions as a therapist by encouraging these animals through their trauma, along with being a brilliant diagnostician and surgeon.
The production design (Dominic Watkins) and sets (Lee Sandales) are beautiful, backed up by an intelligent script by director Stephen Gaghan and his co-writers.  Danny Elfman’s music and Guillermo Navarro’s cinematography likewise contribute a great deal to this delightful production.
The production has much of value for children in modeling teamwork (“Teamwork makes the dream work”), the value of persistence in reaching a goal, recognizing that individuals need to be encouraged through their difficulties, and the efficacy of forgiveness in making everyone feel good about what they are doing.

A delightful action movie for children about how animals and humans can work together for mutual benefit.