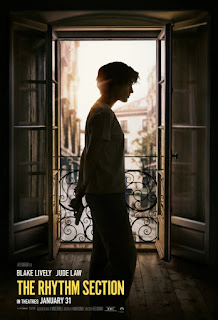 Is there something called violence porn?  I got the idea while watching this movie; the script calls for one formulaic violent scene after another, with all the expected moves, a lot of tension, a little torture, and some thrills, then the climax.  This kind of scene is one repeated at least five times in the film, always with the star, Stephanie (Lively—though none too lively here, at least in the beginning), involved in hand-to-hand combat with men much stronger than she is.
Stephanie has PTSD after all members of her family died in a plane crash. She’s a mess and surviving in a brothel when a reporter comes calling, wanting to talk to her because he has information that the crash was a terrorist attack.  (It had been reported as mechanical failure.) She has vengeance on her mind, but…  And this is the worst part of the movie, showing how she reacts and the consequences.
Soon, Stephanie begins to perk up, fueled by anger, and ends up in Scotland, looking for the journalist’s source.   He is actually already onto her and who she is, and tries everything he can to dissuade her from getting involved, because they’re dealing with an international terrorist group.  Iain Boyd (Jude Law) tests Stephanie’s will and strength mercilessly. When he feels she’s ready, she is sent on one assignment after another, always with the ultimate intent of identifying and taking out the perpetrator(s) of the crash.
The film directed by Reed Morano (Mark Burnell, writer) lacks all the imagination and creativity of a Knives Out or The Gentlemen, just released.  The first part sags because Stephanie is portrayed so much as a loser and a klutz, you’re repelled.  That she is miraculously transformed so soon after to be an Amazon fighter is implausible.  [And of course my biggest complaint is that she is directed to scream (like “a woman”) during a perilous car chase.  When have you ever heard a male actor scream as he is careening through traffic?]  The rest of the story becomes tedious as one expects the same scenario over and over.
The best segments are those in which Jude Law and Sterling K. Brown are involved. These two fine actors are able to transcend the script and capture your attention with their believability and power.  Unfortunately, Blake Lively at this point does not possess those levels of skills.  As much as the filmmakers intended to portray Stephanie as a “bad ass”, they and she are not able to convince us.  More positive in The Rhythm Section are the music by Steve Mazzaro (and Hans Zimmer had some involvement) and cinematography by Sean Bobbitt.

You are likely going to want to skip The Rhythm Section.