THE SONG OF NAMES 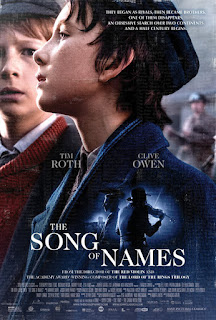 The title—which is the same as the novel by Norman Lebrecht—is puzzling, but its origins will be revealed in the movie, along with its cultural associations. Fundamentally, the story is about brotherly attachment between two boys across many years.  Martin’s father, Gilbert, out of his love of music decides on the spot to take a young Jewish violinist with promise into his home in London during the build-up of WWII when the Nazis were apparently going to invade Poland, the boy’s country.  Davidl’s father returns to Poland to protect the rest of his family, promising the child that he will return for him.
Gilbert also thinks the arrangement will be good because his son Martin is about the same age as Davidl, and they can room together.  It turns out that the two boys are decidedly different in character and values, but after initial conflicts, arguments, and competitions, they become fast friends, though always with an edge.  An underlying sibling rivalry develops immediately, especially when Martin sees that his father clearly favors Davidl and indulges him much more than he does his own son.
The complexity brought out in this relationship fraught with ambivalences is one of the strengths of the story because it carries a wealth of information about families and individuals that rings true to life and to the people we know from our own experience.  It’s made even more complicated by Davidl’s chameleon-like personality—intelligent, self-possessed, witty, cynical—very much his own person whose behaviors and points of views are often surprising.  He’s charismatic, along with being a gifted violinist. This is very different from Martin, a protestant well brought up to show respect, follow the rules, and think of others.  He is bright, though, and is also a musician (piano).
In adult years, Davidl has achieved fame, and is considered one of the best. Gilbert has booked him for concerts, which are well attended.  Then, one night, inexplicably, Davidl does not appear for a performance, and the waiting audience is sent home.  Davidl had been greatly affected by news out of Poland and unknowns about his family.  It is perhaps after getting some very distressing news about where they have been sent that tips him over the edge.  Davidl has abruptly disappeared before, but this time, he cannot be found.
The plot then takes a turn into a detective story, with Martin obsessed with finding Davidl and getting an explanation.  This extends over 30 years, with his wife Helen becoming thoroughly exasperated with his doggedness.  We question what this is about, but can only speculate from a number of possibilities.  This detective story aspect of the film appealed to me, as Martin goes on one lead after another trying to trace the enigmatic Davidl.  Through these efforts, more of Davidl’s life and his experiences are revealed, along with the people he has met along the way.
The real star of the movie is Tim Roth, who plays Martin with all of the acting skills he has.  It is probably his best performance to date.  Photography by David Franco is exquisite, particularly when he superimposes two scenes from earlier and later in the story as a graphic to illuminate the significance of “The Song of Names” for the characters.  Howard Shore’s music is likewise a major asset in classical works as well as the background score.  The three actors who play Davidl (Luke Doyl, Jonah Hauer-King, Clive Owen) convincingly and expertly play the violin.  How much is their own playing versus special effects, I don’t know; I couldn’t tell.  Either way, it was beautiful music to my ears.

A period film set in the world of music that combines pure drama with cross-cultural exchanges, wartime trauma, and sleuthing to extraordinary effect.

Posted by donnarcopeland at 10:23 PM