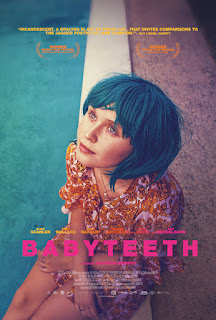 This romanticized fabrication of the cancer experience is likely to dismay those who have actually gone through it—especially when the patient is a child.  As someone who worked in a cancer center in Pediatrics as a psychologist for almost 25 years, I found little in the film that resembles any of the hundreds of families I encountered.
The backdrop of the film features a family (clearly made up by filmmakers) in which the father Henry (Mendelsohn) is a psychiatrist, the mother Anna (Davis) a musician, and the daughter Milla (Davis) a quirky teenager with cancer. (This is only revealed after a time.)  She chances upon Moses (Wallace) at the train station when she is in some kind of stupor and doesn’t board with her classmates.  Moses has just almost run over her trying to make his train, but she is in a daze.  (No indication as to why.)  He is doing some kind of stretch on the platform when she comes to and he speaks to her.  (Ding ding ding, you should hear the bells sounding.)
They speak briefly, and the connection is made (if you believe in fate).  Milla (not one of the in-group in her high school) is smitten at first glance.  What develops is an unlikely story about Milla bringing home this drug dealer who exploits her attraction to him (he from a home that he has been kicked out of) to take advantage of her family who is well off.  But he is not a clear-cut sociopath.  During the course of the story, he often makes sense more than almost anyone else, and clearly matures in due course.
The film goes into detail in describing the parents.  Henry is a pill-pushing psychiatrist who has little regard for psychotherapy and is easily distracted during his practice.  (Moreover, as a clear-cut ethical violation, he treats his wife in his practice.)  As a result of his prescriptions (the recommended dosage of which she ignores), Anna has become a pill-popping zombie at times.  At one point, Anna states, “This is the worst possible parenting I can imagine”, and I agree.  The parents’ clearly stated pronouncements are never followed up, and they often come across as helpless in the face of life in general.  An example is when Milla goes missing one night, it is ludicrous to see Anna canvassing the city with a picture of her, asking if pedestrians she sees on the street have seen her.
Milla is portrayed as a cheeky teenager who mostly has a clear idea of what she wants, but is often flummoxed by her parents.  Something in her recognizes what stability Moses has to offer—despite his background—and she clings to him as a lifeboat in a storm. She is realistically portrayed as a thoughtful, sensitive teenager who is trying to make her way despite her parents.
The whole story of this film seems so made up with unlikely and unconvincing attachments and events, I could not take it seriously.  The actors do a fine job—particularly Eliza Scanlen and Toby Wallace as the young couple—and serve as the strongest features of the film. Ben Mendelsohn has a succession of fine acting roles, but this script doesn’t allow him to exercise the same talent.  Essie Davis as the convincing heroine in Babadookalso gets little here to show off her talent.
An example of looseness in the integrity of Babyteeth are insensible titles of sections, the whole of which offer little clue to the scenes that follow, including:  Insomnia, Breakthrough, A Little Bit High, Nausea, Fuck this, Romance (part I and II), The Shower Routine, Sleeptalking, Seasons Greetings, What the dead said to Milla, Everyone Was Invited, A Beautiful Morning, and The Beach.
Although Babyteeth has been well received by critics, I cannot think of anyone I know who would want to see this movie.

A fantastical tale of a teenager with cancer.  No, the ending does not redeem it.

Posted by donnarcopeland at 6:17 AM