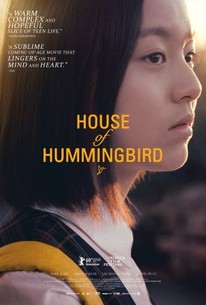 House of Hummingbird is a mood piece, beautifully filmed, teeming with depth of feeling, and a story that keeps you guessing.  It’s clearly from a culture so different from my own, but so engaging it felt like I was in that country (Korea).  Penned, directed, and produced by young filmmaker Bora Kim, it’s remarkable in its sophistication, both in terms of filmmaking and in storytelling.  There are instances in the film in which it’s so clear that Kim is psychologically attuned to the human condition and the experience of young people as they’re trying to make sense of the world.
The story centers around Eun-hee (Park), an eighth-grader in Seoul, Korea, in 1994. She’s considered unattractive and “odd”, not only in her family, but at school.  In a poll conducted by a terrible teacher asking the class to designate which of their classmates was most likely to be a delinquent, Eun-hee “won.”  Then we get some pictures of her family at home, where father and mother are in discord, but inexplicably make up after a violent argument, Eun-hee is flogged by her brother, and her sister comes and goes at all kinds of hours and asks Eun-hee to cover for her.
In addition, the movie recounts interactions and conflicts involving mother’s brother, Eun-hee’s brother and sister, some of her friends, and—most heart-warmingly—Eun-hee’s tutor, Miss Yong-Ji (Kim).  In this sea of non-communication, the tutor is presented most eloquently and meaningfully to Eun-hee—and to us.
This is primarily an evocative illustration of the lack of communication in the Korean culture.  Major issues are skirted around, and even when someone is bawling out loud, you see no signs of comfort—even a hand on a shoulder—even within a family.
Then Eun-hee encounters Miss Yong-Ji, who takes over tutoring after the poll-taking a—hole is let go.  How—you wonder—did this woman discover/develop the almost uncanny ability to teach in a way that will be therapeutic to her students?  For instance, in answer to the question about “whether you ever hate yourself”, Yong-Ji responds with, “It takes some time to learn to like yourself.” That demonstration will be the kernal of truth and beguilement central to this beautiful movie.
The last scene captures the quality of the film by a poignant attempt to reestablish reassurance and hope.
I feel sorry that many will not appreciate House of Hummingbird because of the pace; this is not really a criticism of the work, but a comment about what we demand of films nowadays.  But if viewers will stay with the filmmaker, they will be rewarded with a sensitive, beautiful rendition of this family’s life, and this girl’s in particular.

A beautifully filmed story to savor and become enthralled.

Posted by donnarcopeland at 10:12 PM