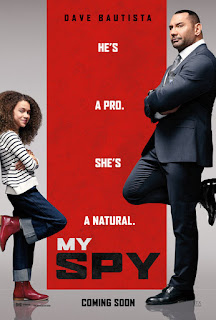 This mildly entertaining “spy story” is formulaic and predictable, although it’s the kind of movie many families love, with a cheeky kid, a little romance, some danger, and an uplifting message.  The bad guys are truly evil, the hero is flawed but teachable, and there are enough tense situations to produce a bit of sweat.
Dave Bautista as JJ, a CIA agent, is charged with protecting a widow and her daughter after the woman’s husband is killed and his brother is likely to come after them, looking for valuable information hidden in a missing external drive. This is a comedown for JJ, who has just taken out a whole cluster of criminals in Paris the CIA was hoping to get information from—a mistake of overkill, literally.  Moreover, in this new assignment, he is sent to partner with Bobbi (Schaal), a tech backup who has a bad case of hero worship and aspirations to become a full-fledged spy.  JJ is disdainful of such foolishness.
But JJ is unprepared for the child and mother he is supposed to protect.  Nine year-old Sophie (Coleman) is shown to be cagey beyond her years, and immediately identifies something her dog uncovers in their apartment—a camera (heh-heh; thank you, Internet!). The rest of the plot thereafter involves JJ’s and Bobbi’s management of the case and the appearance of a real threat.
Young Chloe Coleman as Sophie is the best part of the movie, primarily for her acting skills, not so much for the script, which has her spouting out lines that are obviously written by an adult.  But despite the artifice, the actress pulls it off and is entertaining throughout.
As a former wrestling champion with ups and downs, Bautista easily conforms to the brawny, slightly wooden CIA character with a grieving heart who can be manipulated by a smart kid.  Kristen Schaal and Parisa Fitz-Henley are given roles that first present as softies, but I appreciated the fact that the writers and directors gave them some aggressive tools to use at critical moments.
My Spy is clearly a family film meant to inspire without getting too far into controversial issues.  It’s mainly a light, fun film for those looking for just that.

A film meant for those wanting a feel-good story with some excitement.

Posted by donnarcopeland at 2:34 PM