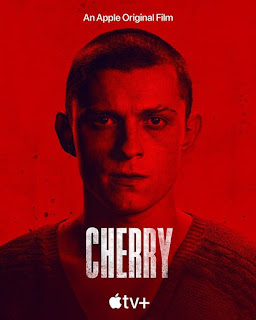 Young Cherry (Holland) is told he popped his cherry the first time he kills someone in the war in Iraq as a soldier.  The film starts when he is in college and feeling aimless, when he becomes smitten with Emily (Bravo).  She has something that always appeals to him (whimsy, sexy, tempting), and they become a pair, and then suddenly she announces she is moving to Montreal.  She wants him to be “adult” about it, but he is crushed.  So crushed he joins the Armed Services, something she never expected, which causes her to change her plans.  They have a torrid romance before he leaves, vowing to stay true to one another.

The movie has an expected trajectory, and illustrates so well how young people do not/cannot anticipate what is going to happen to them in new ventures.  As is said, “War is hell”, and Cherry is unprepared for the horrors of being a medic.  Soon after he finishes basic training, he is ready to go home; but it will be many months before that day comes.

In the meantime, he does provide medal-earning service, and arrives home to a new house Emily’s parents helped them obtain.  Things look rosy, except Cherry is having nightmares, night sweats and other symptoms associated with PTSD.  For some reason not explained, he does not get the appropriate help his condition requires, and not only does he start self-medicating, Emily becomes addicted as well.

It’s predictable what is going to transpire after this.  The couple gets into a heap of trouble, and the only question is whether/how they will pull out of their troubles.

After helming adventure films such as two Avengers movies and two Captain America movies, I’m puzzled about the Russo family (Anthony, Joe, Angela) turning to a production like Cherry, which is basically a character study, not only of Tom Holland’s character, but also that of Clara Bravo and Jack Reynor.  They fit into stereotypes in the drug world, but for a character study, more filling out of the characters’ psychological make-up is required.  The film would have been much more interesting if even the families of origin for these three would have been explicated.

Some evidence that the filmmakers intended something of a satire is indicated by various signs we see, such as “Bank of F….. America”, and “Dr. Whomever.”  These seem lame in the background of severe opioid addiction, so it’s hard to see them as funny.  I think inserting these jabs into the seriousness of the story and the main characters is a mistake.

Tom Holland is an award-winning actor of Spider Man and Avengers fame, and although his character here is decidedly different from those, he is able to show a much more vulnerable man who, nevertheless, is able to slog through diversity.  Supporting him in a perhaps idealistic character is Clara Bravo in an excellent performance representing the female always lovely in her loyalty and care, even with the facial marks of a meth addict.  Jack Raynor envelopes his character as a drug dealer par excellence who never gets the overall picture.

The Russos have exceeded their capabilities in their attempt to portray a character with major difficulties coping with real war and its aftermath.

Posted by donnarcopeland at 6:55 AM