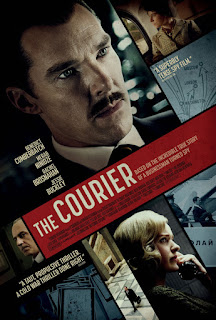 Those of us who remember the Cuban Missile Crisis in the 1960’s will relate to the tension and intrigue that transpires in The Courier.  That was a particularly apprehensive time, and as I think about the White House administration just previous to the present, I wipe my brow, wondering what would have happened had we faced a similar crisis in the last four years.  Interestingly, the Russian spy in The Courier reflects on why he is warning the U.S. about their leader.  He describes Krushchev as impulsive, chaotic—“a man like him should have no clear command.”  The spy wants to save the world from a nuclear holocaust.  This film is based on the events that happened behind the scenes during that period.

Greville Wynne (Cumberbatch) is a British businessman who has done well with his company, so seems to MI-6 and the CIA to be a perfect courier for these agencies to exchange information between them and their Russian contact, Penkovsky (Ninidze), a member of the GRU, who has cleverly sent a message to them about his concerns.

Recruiting Wynne to be the courier is no easy task; he has an ideal life and wants no part of anything that will endanger it.  He emphatically says no at first, but the CIA agent Donovan (Brosnahan), who has done background checks on him, knows how to appeal to his sense of responsibility and loyalty.

Wynne flies to Russia and meets Penkovsky, and as it turns out, they’re from similar backgrounds and become friends, developing a sense of loyalty to one another.  The operation is successful for some time, until…  This is a spy story, so the less the viewer knows about it beforehand, the better.  And a good spy story it is, with plenty of suspense and intrigue, and a group of characters that are interesting and likeable.  We’re given enough information about them to care what happens to them.

Director Dominic Cooke’s production and writer Tom O’Connor’s script (both producers as well) supply the elements that make this an interesting, engaging thriller.  The well-chosen cast makes it even stronger.  Cumberbatch—no stranger to spy-thrillers and action movies—portrays all aspects of the complicated Wynne to make him believable and compelling.  He is matched with Ninidze, who wins our confidence in his portrayal of an “enemy” to trust immediately.  I got a special thrill from seeing Rachel Brosnahan and Jessie Buckley ace roles that are way different from their recent work (“Mrs. Maisel” for the former, and “I’m thinking of Ending Things” for the latter).  And finally, seeing the erstwhile Game of Thrones’ Qyburn, Anton Lesser, in a minor role was a treat.

Although there isn’t any really new material here, the pace and the performances of the actors make the film worth seeing.

This intrigue set during the Cuban Missile Crisis in the 1960’s is also a model of loyalty and trust.