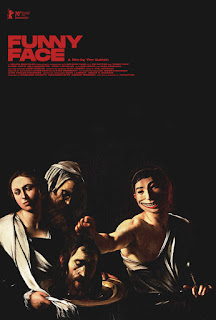 Funny Face is a mood piece with a plot that is slow to build.  All the components of story, song, lights, colors, and scenes add to the moodiness, while the plot slowly reveals what it is about.  In the meantime, the viewer stays curious about how the characters and what they’re experiencing will relate.

Case in point, we see a young man named Saul (Jarvis) sporting a mask off and on resembling the Joker of DC Comics films.  And then we see a young woman (Meskienvar as Zama) dashing home, late at night, stopping to put on Arabic garb including a burka.  She is confronted by her aunt and uncle for staying out so late.  Saul overhears his grandparents complaining about being evicted because a development company is seizing their home.  That the two characters meet in a grocery—and how they meet—will be part of the intrigue.

Inserted at this point is the almost hilarious “getting to know you” dance that Saul and Zama make after their encounter in the grocery store.  You the viewer are puzzled/fascinated, not only by his actions, but by hers as well.  But indeed, they have formed a connection.

So it’s intriguing how they stay together and form a bond—not at all by the expected means—that will be beneficial to both.

But there are “bigger” things going on in the city of New York.  We get glimpses of major business development, with aspirants of wealth beyond imagination and the world in which they travel.  So very different from our early protagonists.  Some grieve for the glory of the past that is gone (building one’s own city skyline) and others trying to make a mark with less vision than self-promotion.  They’re in conflict with one another as much as the young couple is with them.

I found this cross-section of a city perceptive in its empathic focus on different levels of society unwittingly dealing with the same issues most perceptive.  They can’t see the whole picture because they see the city only from their own point of view.

Writer-director Tim Sutton has presented a moving, commentary on typical clashes between generations, cultures, and individual personalities.  I find his perspective helpful, and his choices of actors, musicians, cinematographer, et al. couldn’t be better.

An unusual film showing significant issues for cities and the people populating them.  The ending is left open for viewers to come to their own conclusions.