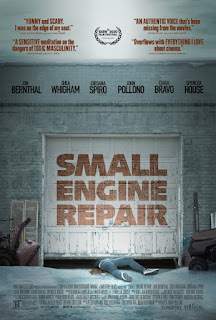 A waaay out of the ordinary thriller.  But you have to wait for it.  First comes a set-up far too long, with old-men stories that have little interest for most of us.  Terrance (Bernthal), Packie (Whigham), and Frank (Pollono) are friends from childhood.  They bonded together during a horrific event early on, and since then, they have a special loyalty to one another, even though there are sharp differences in point of view.  Now that they’re older, they talk more and are able to show a bit more empathy.

Frank has a daughter Crystal (Bravo) who was looked after by Terrance and Packie while he was incarcerated.  His ex-wife Karen (Spiro) is pretty much a loser, so Frank and his buddies try to be the best parents they can.  In the meantime, Crystal shows she is a smart cookie and manages to get accepted into a major university.  Her lower middle-class caretakers couldn’t be more thrilled; they’ve never experienced such pride in progeny in their lives.

Suddenly, something happens by coincidence, and Frank—who has been perfectly straight since his release from prison—encounters a figure, Chad (House) that will have a lasting impact on all of them.

This is a major submission for John Pollono, who has written, directed, and stars in the production.  He has woven a story that will capture most of the audience at the end; I just don’t know how long people will stay with it.  Certainly, if they do, they will find a “last act” well worth the wait.  If I hadn’t been watching it for review purposes, I would have left before the half-way point.

But by the end, Pollono poses any number of ethical/moral dilemmas that will grab you and keep you on edge.  John Bernthal and Shea Whigham play doofuses so very well, and the references to gays are well placed.  John Pollono is optimally convincing as a complex personality with a singular purpose, but with multiple tugs at his soul.  The last-minute appearance of Jordana Spiro as his ex-wife helps to make the whole drama more plausible, as it provides some relief from the male-dominated script.  Cidra Bravo appears gifted in playing a tragic figure, but I object to filmmakers modeling such a character for young people.  It’s truly jarring to hear her lingo as if she were “one of the [older] boys.”

A film hard to sit through, but with gripping ethical/moral decisions having to be made at the end—which redeems it to some extent.

Posted by donnarcopeland at 11:05 AM