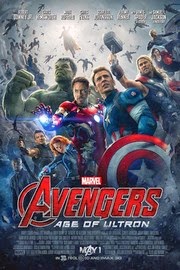 This version of the Avengers features a dizzying number of battles with characters flying at each other through the air at lightning speed.  The story opens with the Avengers in an eastern European country, Sokovia, raiding a Hydra outpost led by evil scientist Strucker who has used Loki’s scepter to create the superhuman Maximoff twins out of humans, one of whom, Pietro (Taylor-Johnson), can run at superhuman speed and the other, Wanda (Olsen), can read and manipulate minds and throw scarlet energy blasts.
But the Avengers overcome Strucker, and when Stark (Downey) and Banner (Ruffalo) take over his lab, they discover artificial intelligence in the scepter’s gem, which Stark wants to use for his “Ultron” peacekeeping defense program.  Unbeknownst to them and to their chagrin, however, when he appears, Ultron is sentient and hatching a plan to “save” the earth from mankind because they’ve done such a bad job.  While the Avengers are celebrating their victory over Hydra and Strucker, Ultron begins to take action by eliminating Stark’s A.I., J.A.R.V.I.S., and stealing the scepter, which he plans to use to upgrade his body and construct an army of fighter drones.  In addition, he talks the Maximoff twins into joining him in his efforts.  He is persuasive, because he talks only of peace, but fails to mention his grandiose plan of extinguishing humans and populating the earth with metal creations in his own image.
When this is discovered, another battle ensues, and Wanda is able to make chaos among the Avengers by hypnotizing them into stupors and transmitting hallucinations that relate to their personal underlying fears, resulting in undermining any sense of team spirit they had.  Now they realize they need a break for rest and teambuilding, so they head for Hawkeye’s (Renner) farmhouse to rest up.  But their recuperation is interrupted by the arrival of Nick Fury (Jackson), informing them that Ultron has forced Banner’s scientific colleague Dr. Helen Cho (Claudia Kim), to use her synthetic tissue technology to perfect his body, so they head for South Korea to foil his efforts.
In the process, allegiances shift among different characters, Stark is able to resurrect J.A.R.V.I.S., which Thor activates with lightning, resulting in a new robot called Vision (Bettany).  The ultimate battle ensues in Sokovia, where Ultron has major plans to use the city in his efforts for global extinction of humans.
Director Joss Whedon, who is also one of the writers, is known for inserting emotional elements into his action films to make them more than simply action scenes with special effects.  This is usually successful, but not so much in Avengers:  Age of Ultron.  The side stories of Romanoff and Banner, Hawkeye and Wanda, and War Machine’s repeated corny jokes, for instance, seem patched in rather than seamlessly integrated into the overall story.  He is successful, however, in making the action interesting and exciting, and by now, after so many iterations, most of the characters have depth and distinct personalities.  As an added bonus to me, Whedon is a master at inserting classical music and literature into the sci-fi action genre—e.g., operatic aria playing in a laboratory that is creating A.I.’s.
The film’s impressive cast, music (Danny Elfman and Brian Tyler), cinematography (Ben Davis), and special effects make this a movie well worth seeing for those who are fans of the superhero genre.

Can the Avengers save the planet?