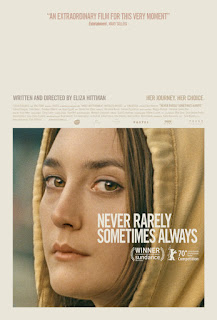 The title?  It comes from a questionnaire the 17 year-old Autumn (Flanagan) is asked to respond to when she goes to New York for a medical procedure.  The questions are probing, and since she is not inclined to talk about her experience at all, they throw her for a loop.
This documentary-like drama written and directed by Elizabeth Hittman tells about a few days in the life of Autumn.  It’s up close and extremely personal; yet, paradoxically, we’re not given much information through dialog.  It’s a bit like watching a silent film and needing to infer what is transpiring visually.  Hittman has the unusual skill of giving the viewer just enough information about the characters and the setting to pique curiosity and keep you majorly invested in what happens.
We meet Autumn right away as she is performing as a singer/guitar player at a small night spot.  Simply brief glimpses of this, her family situation, and her daily life previews for us the poignant, story that will unfold.  Autumn is extremely reticent, not even being forthcoming with her cousin and best friend Skylar (Ryder), who provides constant support and requires little explanation.  Somehow, the decision is made to go to New York from a community in Pennsylvania, neither girl apparently ever having been there before.  But they have a mission and go by bus to the city.
In eliminating dialog for the most part, I suppose that Hittman is making a commentary about young people today who communicate primarily through their devices, and otherwise do not have extended, heart-to-heart discussions that most people of previous generations seem to do automatically.  It is somewhat of a relief to see medical professionals patiently asking Autumn questions, ones which require answers (ah…communication!).  Most of the time, though, Autumn and Skylar undergo and work through major dilemmas with little discussion.  One young man does engage them (primarily Skylar) on the bus to New York, which only serves to increase our concern for the girls.
Another issue Hittman comments about is the absence of family support and government services available to teenagers with few resources.  We’re not actually told about Autumn’s family, but are given enough views of it to surmise what it is like.  Left to her own devices, Autumn seeks help from social services, but of course receives little that is useful.  Interestingly, she does get some empathy and some services in New York City (going against its reputation), but these are limited, and the girls have to be clever, brave, and assertive not to be abandoned altogether.
I think this film is laden with social-psychological meanings and commentary, not only about families, but also about society’s insufficient readiness to meet the challenges that are presented by a new generation in a rapidly changing technological environment.  Are families (however constituted), society, and government prepared?  Food for thought.
This glimpse of a few days in the life of a teenager left on her own (by her own choice) says so much about the current state of affairs viz a viz family complexities and limited social services available.

A gripping film capturing a few days in the life of a teenage girl left on her own (by her own choice) but with the help of a steadfast friend.

Posted by donnarcopeland at 9:02 AM No comments: