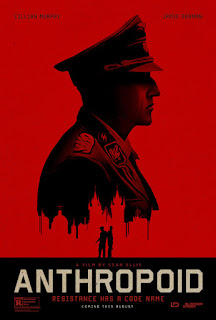 Anthropoid is a ghastly account based on the Allies’ secret plan in World War II to assassinate the “Butcher of Prague”, Reinhard Heydrich (Detlef Bothe), who was the leader of the Nazi forces occupying Czechoslovakia in the early days of the war.  Hedrich was Adolf Hitler’s third in command who had designed the Final Solution meant to complete the Nazi effort to exterminate the Jewish people.  Self-exiled Czech and Slovak soldiers Josef Gabcik (Murphy) and Jan Kubis (Dornan) were charged by the British government and the exiled Czech government officials in London to carry out the assassination.
It’s an extremely dangerous mission since the Nazis had all but wiped out the Czech resistance, but Gabcik and Kubis were able to connect with two who were still operating, Uncle Hajsky (Jones) and Ladislav Vanek (Dorocinski).  Vanek was openly against the mission from the beginning, and tried numerous times to get Gabcik and Kubis to abandon the plan. Two others initially opposed, but who ultimately helped were two women, Marie (Le Bon) and Lenka (Geislerová).  They were asked to pair with the men when they went out, to lessen the suspicion that a lone man would arouse.
The men were given a room in the Moravec household and carefully mapped out the habits of Hedrich, who was to be killed on his way from home to the Prague Castle in a Mercedes convertible.  He liked to ride with the top down to make a statement about the successfulness of the German occupation.  Gabcik was to jump into the street to shoot him when the car slowed to make a curve, and Kubis would be ready with hand grenades for backup.  Karel Curda (Simek) another resistance operative was to be further backup, but he turned out to be unreliable.
The film shows the operation in vivid detail, as well as the horrendous aftermath, which the Nazis were so enraged about, they wiped out two villages (wrongly tied to the operation) and killed or sent to concentration camps over 5,000 men, women and children.  The final standoff takes place in a church that was harboring Gabcik and Kubis and a number of other parachutists needing protection, with the Czechs showing uncommon bravery in trying to fight off an army of Nazi soldiers storming the church after a tip from a traitor.
Anthropoid, co-written with Anthony Fresin by director Sean Ellis presents a very graphic account of a bloody, torturous time during the war, which reminds us of how plans hatched far away from the battle scene can have far-reaching, perhaps unpredictable, consequences.  It also reminds us of how bravely men can fight when the stakes are so high our basic freedoms are jeopardized.
Murphy and Dornan carry the bulk of the show with their excellent acting skills, showing all the emotions and thought that can roil inside a person under such circumstances.  Le Bon, Geislerová, Jones, Dorocinski, and Simek provide quality support in their roles.  Another shout-out is deserved by Ellis, who served as cinematographer of the film, along with his other roles as writer and director.  Chaotic battle scenes are clear and easy to follow visually, and there’s a nice balance between black and white and vivid colors.

A brutal account of a dark time in Czechoslovakia during WWII.

Posted by donnarcopeland at 7:57 PM