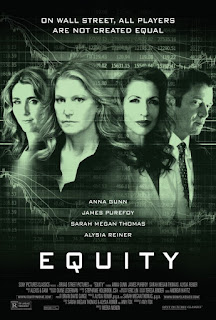 It’s obvious that Equity was made primarily by women because it captures so accurately women’s perceptions and our experience in the world—at least in the sphere of business, and particularly on Wall Street, I presume.  Unfortunately, no character comes across as being particularly warm-hearted and generous.  Even the main character, Naomi (Gunn), is not always sympathetic, even when she is betrayed.  I had to wonder whether if she were a bit more nurturing and soft (without being a pansy) people would be more inclined to work for her rather than against her.  Her leadership was actually not much different from that of a man, but women are not generally forgiven for being as hard-nosed as men.  It could be that the filmmakers were more interested in painting a picture of Wall Street than addressing women’s issues, however.
Naomi is a committed, hardworking banker with aspirations to be a global leader.  She’s given feedback about why she’s not appointed to the position just opening up, but it’s something like she irritates people or she wasn’t dressed right on one occasion.  Unfortunately, other women in the film do get what they want by being attractive, sexy, and using traditional feminine wiles.  But the movie is fair on this point—male characters likewise use flirtation and charm to get what they’re after (primarily information).
Cache is a privacy firm that wants to get into social networking and have a reputation for being the most secure.  Naomi recognized from the start its potential and has continually fostered its success.  Now, it is almost time for Cache to go public, and there’s a great deal of excitement around issuing their IPO.  The film highlights how insider trading can sabotage such a launch and we see how whispering and vindictiveness can wreak havoc personally and professionally.  It’s galling to see how during such times, there are people who profit.
Two of the actors, Sarah Megan Thomas and Alysia Reiner, collaborated with Amy Fox in writing the interesting story, which is like watching a train wreck about to happen.  We see the behind-the-scenes plots of determined people who won’t let anything or anyone stand in their way.  For all her ambition, and despite her ethics and business-like manner, Naomi is vulnerable and doesn’t really recognize it.  She’s smart and eventually figures out the truth, but she doesn’t anticipate the lengths to which others will go.
Director Meera Menon does a good job in presenting a view of the cutthroat financial world and its culture of corruption and greed.  The cast is well chosen, with Gunn, Thomas, Reiner, and Purefoy appropriately highlighted.

The world of Wall Street from a woman’s point of view.

Posted by donnarcopeland at 1:47 PM