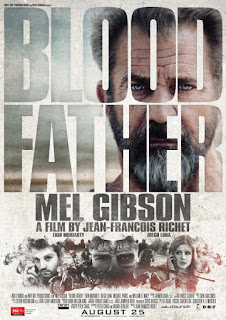 In a taut drama with a predictable story line, Mel Gibson stars as an ex-con trying to clean up his act when his missing teenage daughter turns up, desperately needing his help.  She got in with the wrong crowd, and asks him to help her get away from ruthless pursuers.  The man loves his daughter and wants to make up for his past mistakes, so he risks parole violations and goes on the run with her.  He calls in chips from people who owe him favors both in and outside prison, and it’s clear he still has the respect of his underworld contacts.
French director Jean-Francois Richet mixes together eye-catching action with character development and good cinematography (Robert Gantz).  Screenwriters Peter Craig and Andrea Berloff based the story on Craig’s same titled novel.  (Craig is the son of actress Sally Field, and is known for other screenplays, including The Town and parts 1 and 2 of The Hunger Games:  Mockingjay, and has a producing role in this film).  Although it’s not vividly original, the story is engaging, and the relationship between father Link (Gibson) and daughter Lydia (Moriarty) is especially interesting in their touching ambivalence toward one another alongside the willingness of each to die for the other.
Gibson brings his considerable everything to the role—regret, a sense of loyalty, devotion, fierceness, paternalism, and fearlessness—perhaps as a way of reflecting his real-life wish to be forgiven for unpopular press he has received.  His character in this film always has a back-up plan in place.  Moriarty has shown her skills in Captain Fantastic recently in a coquettish role that she uses here, but mixes with an array of decisive actions such as courage, assertiveness, and willingness to fight for what she wants or feels responsibility for.  We will likely be seeing a lot more of her in her ability to take on different personas.  Macy is another actor who is inevitably good in character roles, and he makes a convincing AA sponsor who genuinely cares about his difficult charge, Link.  We don’t see much of Diego Luna, but his supporting role is significant.
Blood Father is violent, appropriately receiving an R rating, but the brutality is not extended or appearing nonsensical; i.e., not violence for violence’ sake.

An action thriller with some heart and character development.