THE 9TH LIFE OF LOUIS DRAX 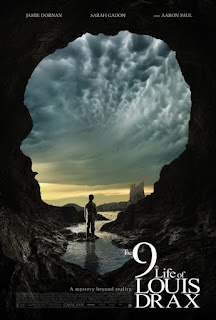 Poor Louis (Skodje).  He is accident-prone even from birth, and escapes one close call after another—which he can chronicle in complete detail—then it looks like death finally holds him in its grasp after he falls off a cliff into the ocean.  Louis’ mother Natalie (Gadon) is an attractive blonde who is attentive and caring, and even though his parents quarrel frequently, Louis is close to his father Peter (Paul) as well.  They’re on a picnic for Louis’ 9th birthday when his parents begin to quarrel and suddenly there is a terrible accident, after which, Louis is taken to the hospital in a coma and his father disappears.
Louis narrates most of the picture, so we stay in touch with him throughout the film, which opens with him as a young man (Longworth) giving a TED talk.  After that, the story is told in flashback, which involves Louis’ mother, his father, his physician Dr. Pascal (Dornan), and his therapist (Platt).
Max Minghella has stitched together a mysterious, exciting thriller based on the novel by Liz Jensen.  It has repeated twists, turns and surprises, as well as a bit of sci-fi in a zombie-like figure and in forensic hypnosis.  Alexandre Aja’s direction keeps a good pace, and although the story jumps back and forth in time, it is not as confusing as that sometimes is in films.
Beckham Skodje as the young Louis is expressive and convincing, speaking his lines crisply like a precocious child.  His responses to his therapist impress you and make you chuckle at his insight and creativity.  Sarah Gadon brings some of the sexiness and fragility that she shows in the soon-to-be-released Indignation to this role, where in both, the character’s whole story only emerges gradually.  Jamie Dornan as a young, committed physician who is still trying to figure himself out conveys the earnestness and susceptibility required of his role, and Aaron Paul is perfect as an ambiguous character you have conflicting feelings about.  Almost stealing the limelight is Oliver Platt, whose approach to psychotherapy is noteworthy for its quality—a rarity in film, maybe because its writers and director are European rather than Hollywood types.
9th Life holds your attention hostage throughout, with just enough of a dash of sci-fi to give it a bit of quirkiness.

An eventful 9th life for one young Louis Drax.

Posted by donnarcopeland at 1:47 PM