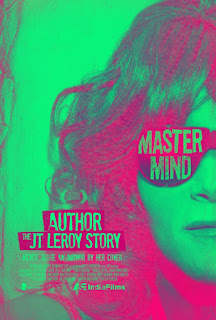 Has ever an author gone to such lengths as this author to hide his/her identity?  I daresay, no; generally, it’s just the opposite.  It’s not just that this author (Laura Albert) hides her identity, but she poses as someone else—a male no less—makes up stories about her early life, and eventually recruits a surrogate to take her place at public events.  Because the documentary by Jeff Feuerzeig jumps around in time and identities shift and transform, it’s a bit difficult to get a coherent picture of what happens.  Despite that significant drawback, this is a fascinating story.
It begins with a 15 year-old boy calling himself Jeremiah Terminator LeRoy calling into a crisis hotline and engaging with Dr. Terrence Owens, and his (actually Laura Albert’s) conversations with him are “like a gasp of air”, after which she would “go under” again.  Implied is suicidal ideation.  It’s unclear how long Laura is in therapy with Owens, but at some point, he suggests that she write—write anything, no matter how it sounds; it’s for her.  Under the name of “Terminator”, she writes, “When Jesus died angels cried, and their tears turned to stones…” and sends it to him, which begins a series of writings, and eventually he learns that she sometimes calls herself “Speedie”, and that randomly, she might be “Terminator”, “Speedie”, or “JT.”  She confides in him that she wants to hide her identity because she is bisexual.
For most of the years ahead, Laura Albert continues to hide from the public, even after her written work comes to the attention of writers (whom she contacts as JT LeRoy) like Dennis Cooper and Bruce Benderson, filmmakers like Gus Van Sant who considers filming her first book, Sarah (part of which was used in the film Elephant), rock stars like Billy Corgan of Smashing Pumpkins, and many other famous people.  She begins to write songs and lyrics for Billy, and they have a child.  The author really likes Billy’s sister, Samantha Knoop, and talks her into presenting herself as JT LeRoy.  Samantha becomes Laura’s “ideal self”, whom she dresses up in attractive clothes, a blonde wig, and large sunglasses.  She even stands in as JT LeRoy with an Italian filmmaker (Asia Argento) who wants to film LeRoy’s second book, The Heart is Deceitful above all Things.
The ruse goes on for 10 years, and then investigative reporters begin a search into the mysterious JT LeRoy.  Eventually, her cover is blown, but even though she is sued for fraudulently signing a contract, she continues to receive praise and admiration for her writing.  Her four books, Sarah, The Heart is Deceitful above all Things, Harold’s End, and Labour were all published.  She continues to be controversial; some saying she lies and others defending her right to use a pseudonym.
Writer/director Jeff Feuerzeig has done a previous documentary that was very successful about another artist with mental health issues, The Devil and Mr. Johnston, which was well received.  He is respectful of his colorful subjects, and his treatment of their lives is thorough and always interesting.  This one fits in a category of stranger than fiction—so much so it’s not always easy to distinguish the two, part of the success of the film.  To me, it would have been improved to present a more organized story that shows Albert’s transitions through time.

A mystifying case of parallel identities and made-up histories.