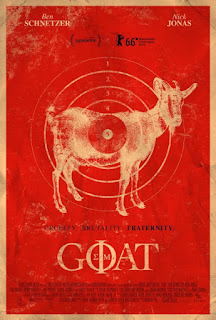 This is an unfortunate movie in some ways; that is, because it’s so sadistic, and I believe it’s not good for people to watch/enjoy such pictures.  In addition, hazing as rough as the Phi Sigma Mu Fraternity dishes out in the film Goat is illegal in most states.  Goat is based on Brad Land’s memoir published in 2004.  Much to my surprise, however, even though “hazing has been banned by 44 states and virtually all colleges and universities”, it is still a problem on college campuses, as shown by a recent comprehensive study (http://diverseeducation.com/article/10811/ reported on by the Associated Press, “Study: Hazing Still a Problem on Campus”, March 12, 2008).  “The study found the highest rates of hazing (74 percent) among members of varsity athletic teams and fraternities and sororities (73 percent). But rates also were high for participants in club sports (64 percent) and performing arts organizations (56 percent).”
After reading this, it partially answered my question as to why Director and co-writer Andrew Neel and screenwriters David Gordon Green and Mike Roberts might have wanted to adapt Brad Land’s memoir about his experience of hazing at college into film.  Perhaps it is to make the public aware that despite the efforts to get rid of hazing, it’s still a problem on many campuses.  Neel also says in an interview at the 2016 Sundance Film Festival that “I’m just interested in the darker side of who we are” (https://www.youtube.com/watch?v=OkYiMSoEuVA - Interviewer, Micah van Hove of No Film School).  And his film is about the darker side of masculinity, despite its appearance in a setting of fraternal “brotherly love.”
Land’s memoir not only describes the brutality of the hazing, but before that, he had been approached by two strangers after a party to give them a ride.   Unfortunately, they were up to no good and beat him severely, leaving him by the side of a country road and stealing his car.  He may have experienced post-traumatic stress syndrome as a result, but his own personality of passivity and denial and family issues kept him from getting help.  Instead, he followed his older, more socially competent brother Brett to college and pledged his fraternity.
The film opens at a raucous fraternity party to which Brett (Jonas) talked his brother into coming, hoping that he will impress the members so they will accept Brad (Schnetzer) into their chapter.  But Brad is more of a loner and leaves the party to go home.  It is just outside the door as he is nearing his car that he is approached to give the two strangers a ride.  After he recovers, as much as he’s going to, he pledges his brother’s fraternity, and goes through the hellacious week of pledging, where he and the other pledges undergo unspeakable tortures.  The Phi Sigma Mu members are shown to be champions of masculinity, but of the kind that is uncontrollably aggressive, brutal, foul-mouthed, and sadistic.
Needless to say, women hardly appear in the film, and when they do, they’re pictured primarily as sex objects.  In this and in other aspects—such as Brad’s personality weaknesses and ethical dilemmas faced only by Brett and the college—the film is one-dimensional.  Hence, not much time is given to insights about or rationale against hazing.  Shock value appears to be the intent here.

A shallow and purposeless look at hazing on college campuses.