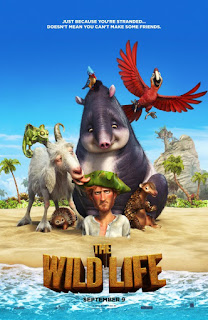 This nWave animated production comes from Belgium, but the language for U.S. release is in English.  Directors are Vincent Kesteloot and Ben Stassen.  It’s basically an extended cartoon, with endless chases and miraculous last-minute saves.  There are some implied messages, but these will likely go over preschool children’s heads, the audience for which I think the movie is intended.  It’s a retelling of the Defoe classic, Robinson Crusoe, with significant departures from Defoe’s plot.
We don’t meet Crusoe right away; first, we’re introduced to rude pirates on a ship who have spied a ship burning in the distance, and they head to it for plunder.  It turns out, it’s Robinson Crusoe’ boat.  Robinson Crusoe (Yuri Lowenthal) is shipwrecked near a small deserted island inhabited by a few animals—a parrot, a goat, a chameleon, a porcupine, a tapir and a bird.  Most of the time they speak in English, which we can understand, but when Crusoe first encounters Mak the parrot, it doesn’t speak English; Crusoe names it ‘Tuesday’ and starts to teach it English.  He names it ‘Tuesday’, the day of the week he found it.
Mak/Tuesday exemplifies a sense of curiosity and healthy adventure.  He has become convinced that there is “another whole world out there” beyond their island, and he would give anything to be able to explore it.  This idea is pooh-poohed by the other animals, who see him as being in dangerous territory.  But Mak is the first animal to reach out to help Crusoe, seeing him as a ticket to his longed-for escape from the island.
After his shipwreck in the stormy sea, Crusoe manages to secure a raft and make his way to the island where the animals have been living like a family.  They’ve never seen humans, so when Crusoe arrives, they are frightened and try to figure out what kind of animal he is.  All the suspicion they have and other reactions to him make up one of the good points of the film about stranger anxiety and how destructive it can be both to residents and to strangers.  It takes Crusoe some time, patience, and persistence to win their trust.  Additional intruders in the form of cats make their way to the island showing us how stranger anxiety is sometimes warranted.  This part of the film constitutes much bumbling on Crusoe’s part, and many close calls for everyone involved.
At one point, when Crusoe goes back to his boat to salvage things he might need, he encounters the pirates who have come for any valuables they can find, and they capture him and take him to their ship, telling him that he is a pirate now.  This involves additional sequences of chases and close calls that, altogether, become tedious and cartoonish.  The big question is whether Crusoe will be able to escape the pirates’ clutches alive and whether the island animals will be safe from conniving cats.

Constant cartoon chases and close calls do not rescue this animated film.