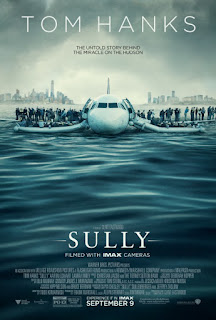 Clint Eastwood has once again captivated us with a true story of heroism and the investigational aftermath, while highlighting the human element as a theme throughout.  His technique of going back and forth between the landing of the plane, Captain Sullenberger’s dreams/fantasies about it, and everyday life gives it more depth and perspective on the import of what the esteemed pilot accomplished.  Similarly, while the NTSB’s questioning seems intrusive and even rude at times, Sully points out that they were just doing their job.  Of course, we know now how extraordinary his actions were, so it’s easy to be impatient with the NTSB after we have all the facts.
It would be expected that the film would start out with passengers being checked in and boarded onto US Airways flight #1549, but Eastwood it not predictable; he spends some time giving us a picture of Sullenberger (Hanks), his co-pilot Jeff Skiles (Eckhart), and his wife Lorraine (Linney).  We see Sully as a modest man, conscientious enough to question himself, feeling the weight of responsibility for so many people that were onboard (155) and horrified at the publicity he is receiving.  Jeff is completely loyal and true in his accounts and support of the captain, and is good at throwing in wry humor from time to time.  He can make Sully smile, which is not insignificant.  Lorraine is the attentive, concerned wife who is dealing not only with her husband’s demanding occupation, but household and family concerns as well.
The actual filming of the cockpit and passenger cabin during the simulation of the incredible plane trip and landing in the Hudson River is harrowing and tense, even though we know how it will turn out.  It gives us a vivid picture of what we know abstractly from listening to the news and reading the newspaper; but seeing the captain and crew processing the terrifying information, taking action, and getting all the passengers off the sinking plane and into boats gives us so much more of what the experience would be like.  This is one of the values of the film.
Beyond that, it shows Sully as being heroic not just in the phenomenal landing of the plane, but also in his calmness (air traffic controller:  “But his voice was so calm!”) in the emergency situation and in coolly analyzing the NTSB simulations and pointing out how the human factor needed to be taken into account.  “You’re looking for human error, then make it [the simulation] human.”  Of course, everyone could see when it was pointed out that in an emergency, a certain amount of time must be spent in logical problem solving.
Tom Hanks seems like a perfect casting choice, in that (at least in my fantasy) his personality is akin to that of Chesley Sullenberger’s—modest, intelligent, socially appealing and outstanding in craft.  But, of course, Hanks is one of our most talent actors, so it may be just that—pure talent.  Eckhart and Linney exert their own talent in the film, proving once again that they are first-rate.

For a thrill, go for a harrowing plane flight where you land on the Hudson River!