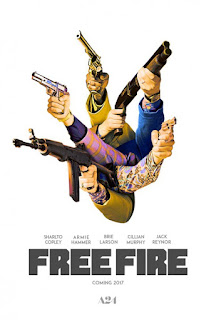 Pandemonium ensues during an arms deal in an old warehouse between two gangs.  With little plot, British comedy among the players is the entertainment during 90 minutes of continuous deafening gunfire, explosions, arson, and general mayhem.  This seems to be a spoof about puffed up men and their need for guns.
In the beginning of their encounter, they quarrel mightily, which stalls the deal until finally the buyers accept the guns that were delivered, which weren’t what they ordered.  But after testing one out with about 20 rounds of shots, they pay with a case full of cash, the guns are carried from one vehicle to another (an orange van) and they start to walk off.  But hold on—a gang member spots one from the other team with whom he had an altercation the night before.  All it takes is for one gun to fire, and off they go.  Everyone is wounded to varying degrees, and there are near deaths, resurrections, and final deaths.
The comedy is led by the leader of one gang, well dressed, well spoken, meticulous Ord (Hammer) who manages to keep a cool head, but is clearly most concerned about his own well being.  “Is no one wondering how I am?” he shouts out at one point.  The other leader is older, somewhat befuddled Frank (Smiley), who seems generally inept but tries to appear smart and shrewd.  Other high points of comedy are offered up by annoying babbling Vernon (Copley), Ord’s sidekick with a South African accent.
The one “bird” involved is Justine (Larson), who has arranged the whole transaction.  She maintains some control over the crowd, partly because she’s a woman and attractive, but she’s also a crackerjack shot.  One of her accomplices, Chris (Murphy) is smitten with her, and keeps pestering her for a date.  They finally agree to have dinner after the deal, but there will be a lot of crawling around on the floor just trying to survive before that will happen.  The slapstick comedy rests on their bumbling when they continually wound one another, crawl around in the dirt, glass, and whatever is on the floor.  Few can walk because of their wounds.
Director Ben Wheatley wrote the unusual script with Amy Jump, choreographing the gunfire and writing bursts of dialog that are like a series of stand-up comedy skits.  The talented actors carry the show, and should be praised for being willing to crawl around in the filth for however long it took to film it.
Free Fire is not for everyone, but will appeal to those who appreciate the characteristic British humor and think playing with guns can be hilarious.

A British spoof on bumbling males and their reliance on guns over conversation.

Posted by donnarcopeland at 8:15 AM