I DON'T FEEL AT HOME IN THIS WORLD ANYMORE 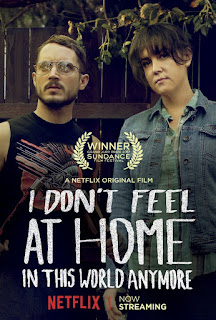 A young nursing assistant in an existential crisis seems to attract trouble at every turn—a foul-mouthed ungrateful terminal patient, dog poop on her lawn, disrespectful clerks and customers in stores, and finally, her house being robbed.  She reports the crime to the police, but gets little response.  She tries to figure out what is happening.  Is everyone the scum of the earth?  She seems to think so, and as time goes on, she gets so hopeless, she wonders whether living is worthwhile.
Ruth’s (Lynskey) personality doesn’t help her; she vacillates between pronounced meekness and using poor judgment in problem-solving her way through hostile encounters. This happens with her neighbor Tony (Wood), who thoughtlessly lets his dog poop on her lawn.  An example of how inflexible she is occurs when, after she confronts him and he apologizes, she doesn’t seem to know what to do.  Granted, some of his responses are bizarre.  At any rate, the beginnings of a friendship are formed, and he offers to help her recover her stolen belongings.
Comedic sequences are sprinkled throughout the film, Ruth’s and Tony’s meeting being one.  They make an entertaining pair—the best part of the film—in their eccentric ways of communicating with each other, mixed with a kind of admirable loyalty.  They are two misfits in society joining together to fight the evil in the world, despite the police detective’s explicitly warning Ruth against a vigilante approach.  She ignores him, and soon the two find themselves mixed up in a major crime operation.
My practical nature often prevents me from enjoying horror and crime films when the characters are shown to do stupid things.  An example here is Ruth picking up a knife from the kitchen to investigate when she hears an intruder in her home—which is almost a trademark in horror movies in general.  Why didn’t she just pick up the phone and dial 911?  Further, when she locates the silver stolen from her, she could just walk out of the consignment shop with it concealed, but in typical “horror” mode, she walks right by the shopkeeper with the silver in plain sight.  This is a trumped up way of extending the drama, because when the shopkeeper runs after her and she swings the box around, hitting him in the face, her nurse persona kicks in, and she stops to inquire about whether he is all right, fatefully delaying her get-away.
The two characters make a motley pair.  She knows something about nursing, but is unable to give a coherent account of her situation to anyone who might be in a position to help.  Tony is an odd man who is small, but compensates for it by weightlifting to build up his strength.  Although he is mild-mannered, Tony is adept at using martial arts tools like morning stars and nunchucks, and does not hesitate to use them.  Both characters show they have compassion (she to a fault) and have a moral set of values.
Elijah Wood makes Tony a full dimensional character who is complex and with admirable qualities.  Melanie Lynskey is harder to watch because Ruth is characterized as inconsistent and frustrating in the way she solves problems and ignores good advice.  But this is more a weakness in writing the character (too many inconsistencies in her personality) than a function of her acting skill, which is pretty solid.  The script as a whole by Director Macon Blair is uneven in its purpose and tone, and goes for unbelievable complexity at the end.
The film did win the Grand Jury Prize for the dramatic competition at Sundance, however; so clearly others valued this film more than I did.

Vigilantism in the hands of a world-weary woman and her gung-ho friend.