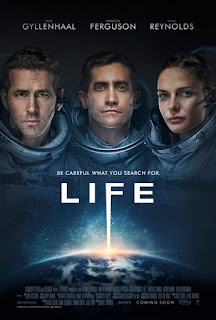 Life: an apt title for a gripping story about a mission to Mars in search of evidence of extraterrestrial life.  The six-member crew of the International Space Station are excited about testing the sample they’ve obtained, and all eyes are transfixed on it when Hugh (Bakara) begins his experiments to see if it will produce life at all.  When a one-cell organism appears, they joke about Hugh’s “child”, and as he teases it to interact, he starts getting attached.  (A rather hokey parallel event occurs at the same time when another crew member watches on Skype as his son is being born on earth.)  Please!
Fortunately/unfortunately, the “thing” now called “Calvin” begins to thrive, and starts growing at an alarming rate.  After only days, it has uncommon strength and enough intelligence to threaten humans and their inventions.  At first, the concern is to get the sample to earth, which is then modified to getting Calvin there, and finally to how to keep Calvin away from earth entirely. Lives are lost in the most gruesome ways imaginable (and each one is shown in graphic detail) as various methods are tried to overcome it.
Director Daniel Espinosa (Safe House, Child 44) brings the script by Rhett Reese and Paul Wernick to life (pun intended), greatly enhanced by Nigel Phelps’ production design, Seamus McGarvey’s cinematography, and all the other special effects artists.  Inventive ways are used to show in gruesomely graphic fashion how Calvin operates and what it does to human bodies.  Of interest are the ways in which we see the astronauts cope with the unreal situation—the times they keep their cool and the times they are completely freaked out.  Also demonstrated is the futility of attempting to plan for every eventuality in a complex system.
Miranda (Ferguson), as the Project Investigator and medical doctor on board leads her team decisively with support from the other astronauts: Roy (Reynolds), David (Gyllanhaal), Kat (Dihovichnaya), Kendo, (Sanada), and Hugh (Bakara), biologist.  It’s a diversified group professionally and ethnically, which melds together nicely to get a job done, and heroes are not scarce.  A drawback of the film is that we don’t get to know enough of the background of the characters to see them and care about them as individuals.  The film seems to be more focused on the technology and special effects than on the people and character development.  It could also have spent more time and highlighted the weight of the numerous ethical dilemmas the crew faced, particularly Miranda.

Life opens up thoughts about space exploration and the possible scientific, moral, and ethical dilemmas that may arise from it.